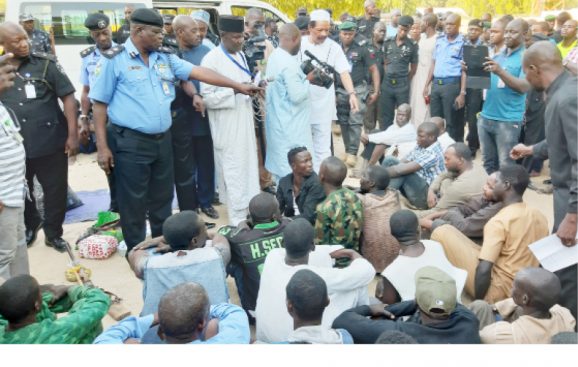 The State Commissioner of Police, Mohammed Aliyu said they were arrested across the troubled state. He said one Alhaji Goni Mallum of Muna Garage, Sheri area off Maiduguri was arrested by the Police on 11/03/20 for being a member of Boko Haram terrorist group.

Aliyu said Mallum confessed that he was a member of the Boko Haram terrorists and was given the task of supplying essential commodities and other logistics to the sect.

He added that N200,000 cash meant for purchase of foodstuff and other essential commodities was recovered from him

The Police Commissioner who was represented at the parade by the Police Public Relations  Officer (PPRO), DSP Edet Okon, listed other items recovered to include five packets of seasoning cubes, two sachets of salt, 10 packets of  sugar, five packets of sugar cube, one packet of Macaroni, one solar panel and solar power kits as well as two rolls of pasta spaghetti among others.

He said at about 2000 hours on 03/07/20 four suspects were arrested for kidnapping one Umara Garba of Timova Village in Askira/Uba local government area of the state but the suspects escaped while the kidnappers were asleep and reported the matter later which led to their arrest by the police.

He added that Abba-KaKa Shehu was arrested for criminal intimidation and attempt to extort one Alhaji Bukar Maka of N20 million.

The suspect called and intimated the aforementioned that he was sent from Lagos to kidnap him.

He said also that Yusuf Augustine and Rufus James were arrested by the police at Uba town of Askira/Uba local government area for criminal intimidation and attempt to extort one Nathan Janar of the sum of N1 million.

They threatened him that they were going to kidnap him if payment was not made as demanded.

While Ibrahim Garba, Adamu Ali, Abdulrahman Adamu, Musa Inusa, Hassan Wakil and Lawan Hamisu were arrested for armed robbery by the police, having conspired and robbed one Iliya Musa of N49,000, armed with dangerous weapons between 03/07/20 and 15/07/20.

Other were also paraded for offences including cattle rustling and fraud.