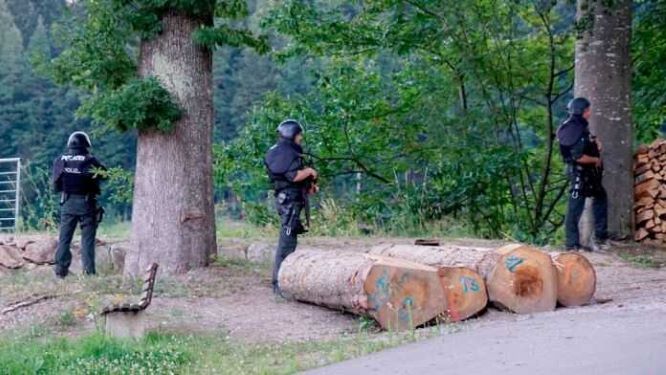 German police deployed helicopters, tracker dogs, special forces and hundreds of officers on Monday to track down a 31-year-old described as a “loner” who disarmed four police officers before disappearing into the Black Forest.

Police could offer no motive for the behaviour of the man, who threatened the officers in the small town of Oppenau west of Stuttgart and some 25 km from the French border.

He is reported to be armed with a bow and arrows, a knife and a pistol. He is also believed to know his way about the forest in the region.

Residents of the town of fewer than 4,800 inhabitants were urged to stay indoors as police closed roads in the area and a flight ban was imposed over the area. Schools and child day-care centres were also closed.

The man being sought was described as homeless and a loner who was known to people in Oppenau. He has had previous encounters with the police, for illegal possession of weapons among other things.

Oppenau Mayor Uwe Gaiser said: “This heavily armed man has plenty of opportunities for hiding in the woods around here.”

The incident began when police attempted to conduct a check on the man in a hut on the edge of the forest on Sunday morning.

“He was initially very cooperative, with the result that it was totally unexpected when he suddenly pulled out a weapon,” police spokesman Yannick Hilger said.

He forced the officers to place their weapons on the ground before fleeing into the forest. dpa/NAN

US rioters sought to “capture and assassinate” lawmakers at Capitol, say prosecutors

AMCON’s refusal to obey court order is a threat to democracy...