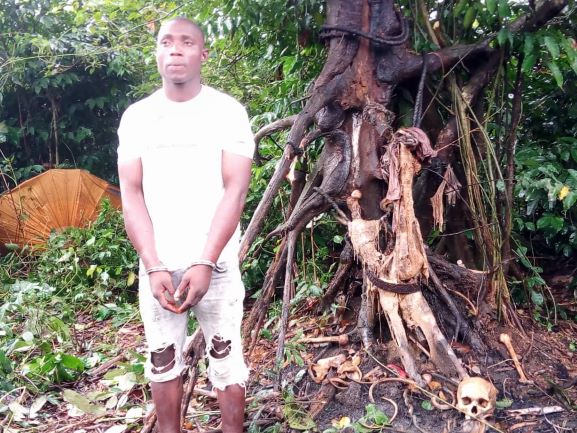 The Police Command in Rivers said it hasd discovered the decomposing corpse of Mr Ereba Dinabari, 38, who was recently abducted from his residence in Woji area of Port Harcourt.

The command’s spokesman, Nnamdi Omoni, confirmed the development to the News Agency of Nigeria (NAN) in an interview on Thursday in Port Harcourt.

Omoni said  that the  victim was kidnapped on May 5, in Woji and forcefully taken to a forest in Alesa community, Eleme Local Government Area of the state.

“Dinabari was taken to a forest and made to pay N1million as ransom for his release. But his abductors later refused to release him after collecting the ransom,” Omoni said.

According to him, the police made the discovery after operatives attached to the command’s Anti-Kidnapping Unit arrested two suspects allegedly linked to the crime.

“The commander of the anti-kidnapping unit, who led operatives, stormed Alesa community and arrested two male suspects aged 23 and 25 years.

“The suspects later led police operatives to a forest in Alesa community, where we found the victim’s decomposing body tied to a tree.

“Operatives afterwards recovered a Toyota Spider vehicle that belonged to the victim,” he added.

The police spokesman noted that the suspects had, during interrogation, confessed to have kidnapped several other residents around Woji, Abuloma, Peter Odili areas in Port Harcourt as well as in Eleme communities.

He said that  the suspects would be charged to court at the end of investigation.

Meanwhile, Chairman of Eleme Council, Philip Okparaji, has condemned the killing of Dinabari and called on the police to ensure justice for the deceased victim.

Okparaji said that  the council would work closely with security agencies to ensure that criminals were rooted out from the area.

“We believe that such collaboration with security agencies will give the people of Eleme a new lease of life,” he said.

The council boss condoled the family of the deceased. (NAN)