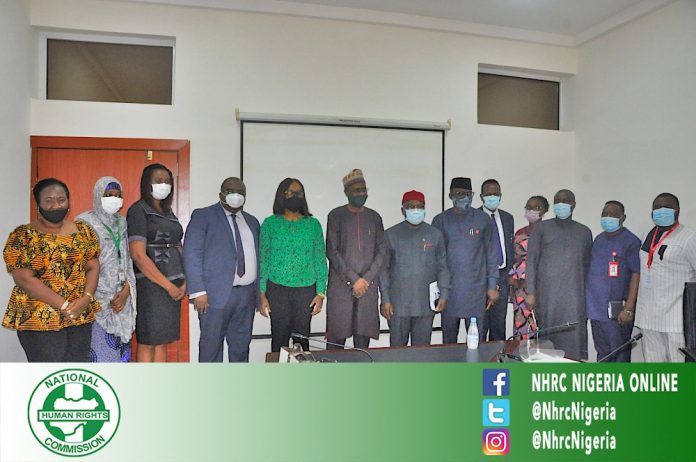 The Executive Secretary of National Human Rights Commission (NHRC), Tony Ojukwu has expressed readiness of the Commission to work with the National Agency for the Control of Aids (NACA) and United Nations Development Programme (UNDP) in addressing issues affecting people living with HIV and AIDS (PLWHAs) in Nigeria.

Ojukwu stated this during a courtesy visit to the Director General of NACA, Dr. Aliyu Gambo in Abuja.

The Executive Secretary who commended the agency for its achievements which had helped in ameliorating the condition of PLWHAs as well as reducing the spread of the disease, said more needed to be done in addressing human rights issues affecting PLWHAs.

He listed the issues to include stigmatisation and discrimination, access to healthcare services, inhuman and degrading treatment and other human rights issues bordering on the mandate of the Commission.

He encouraged NACA to mainstream human rights in to its work, saying the Commission has its presence in the 36 states of the Federation and is therefore ready to use its strength and spread to work with NACA in reaching out to people whose rights were violated as a result of their health status.

The Executive Secretary said he looked forward to an MoU with NACA to collaborate especially in areas concerning the rights of PLWHAs and by extension rights of persons affected by Malaria and Tuberculosis.

Responding, the DG of NACA expressed delight at the gesture of the NHRC saying stigma and discrimination has become a big challenge for PLWHAs and persons suffering from Malaria and Tuberculosis.

Dr Gambo said the services of the Commission remained key in the work of NACA because the Agency was always in the field working in the hospitals and attending to patients.

The intervention of the Commission in addressing the human rights abuses of PLWHAs and others would be a great relief to the agency.

“We can work with each other to realise our common goals and improve the lots of the less privileged,” Dr Gambo added.

Dr Alex Ogudipe, Director Community Prevention Care and Support Services, said NACA had confidence in the ability of the Commission to deliver on its mandate and he referred to the giant strides of the Commission in its report of human rights violations during the COVID-19 lockdown.

Dr Ogundipe urged the Commission to use the same vigour to address the issue of human rights violation affecting so many Nigerians living with HIV/AIDS.

He said NACA’s records had shown a lot of work place discrimination and stigmatisation on health ground.

He disclosed that the agency was proposing to establish human rights reporting desks in 6 geo-political zones where people could report human rights violations experienced as a result of their health status.

“This is an area that NACA can easily collaborate with the Commission considering its capacity and strength on ground,” he said.

In her remarks, the focal officer on gender UNDP, Ms Onyiye Ndubuisi said relevant stakeholders had a role to play in addressing the issues of human rights violations affecting various sectors of the society.

She expressed optimism in the ability of the Commission to hold violators accountable, saying, “access to justice is the way to go in curtailing violence against women”.

She pledged the support of UNDP to work with both agencies in the fight against human rights affecting women generally.

Progress as Olu of Warri-designate, Emiko, proceeds on compulsory seclusion

Breaking: U.S. resumes use of Johnson & Johnson’s Covid-19 vaccine despite...