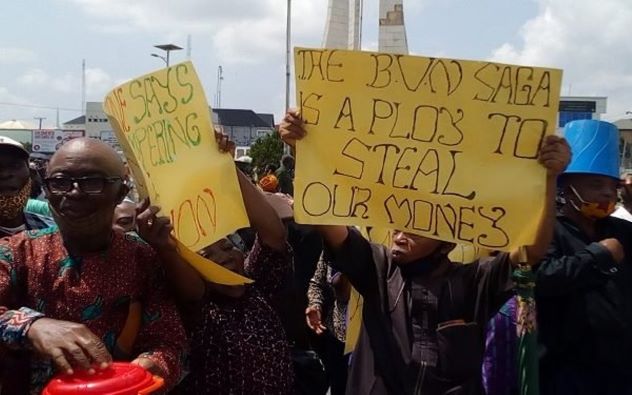 Scores of pensioners in Imo State on Tuesday protested over unpaid pensions and gratuities owed them by the state government.

This is just as the pensioners are also mourning the deaths of 42 of their members who died in the past five months as a result of non-payment of their pensions.

The pensioners, who carried plates begging food from motorists, also sang sorrowful songs, while carrying placards with inscriptions such as ‘BVN saga a ploy to steal our money’, ‘Retirees demand their pensions’, ‘What offense did pensioners commit?’ amongst others, to explain their agitations.

The protest shut down the state capital, particularly the government house axis for hours while security operatives were on ground to forestall breakdown of law and order.

Speaking to journalists on behalf of the protesters, the chairman pension intervention committee of theNigeria Union of Pensioners(NUP), Comrade Iyke Ohaneje, expressed grievances over the arrears owed them.

He claimed that pensioners in the state were owed a backlog of pensions arrears over a period of four months from February till date.

Ohaneje however claimed that the pensioners were not demonstrating nor trying to disrupt government activities, but on the streets to beg for alms to feed themselves since tge government had refused to pay them.

“The reason is because Governor Hope Uzodimma has refused to pay us since four months. We cannot afford to stay idle while our members and their families are dying of hunger.

“Already, 42 of our members have died since February till date. These are the one we have their records. But, there are those in various rural villages whose deaths have not been to reported as a result of the ongoing coronavirus pandemic. So, we are begging you people to help us with money to buy food.

“We’re telling government to release our pensions. It is not their money. It is our money saved from our salaries over time which we asked government to keep for us so that when we retire, it will be paid to us as pensions’.

Also speaking, Dr. Ibeagi Obiora who retired as a veterinary doctor in the state’s ministry of agriculture, said this was not the case during the short tenure of Emeka Ihedioha.

“Governor Uzodimma is claiming to be saving N2 billion monthly, and increasing the state internal revenue, yet he doesn’t want to pay us our pensions. My problem is that the state government is claiming to have cleared pension arrears and calling us ghost pensioners. Let them come out and see the over 3000 pensioners protesting here today that we are not ghost pensioners”, Obiora said.

Addressing the protesters, the secretary to the government of Imo State, Cosmas Iwu, who responded on behalf of the governor, commended the pensioners for their composure ,assuring that their pensions would be received before the week runs out.

The SSG said the delay in the payment was not deliberate but was due to the inconsistency contained in the pension list.

Iwu, who assured that the problems with pensioners salary and gratuity have been ratified, further said the government of Governor Uzodinma has come to solve problems not to apportion blames.

EFCC Chairman: We have recovered $153m, 80 houses from Diezani