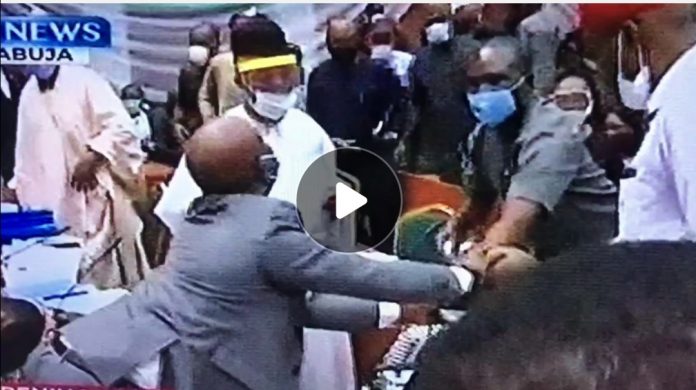 The Peoples Democratic Party (PDP) says the dramatic collapse of acting Managing Director of the Niger Delta Development Commission (NDDC) Daniel Pondei, while being grilled by the House of Representatives, further underscores the weight of corruption that have bedeviled the All Progressives Congress (APC) administration.

The party in a statement by the National Publicity Secretary Kola Ologbondiyan said it was obvious that the embattled NDDC acting Managing Director collapsed under the weight and shame of overwhelming collective guilt brought on him by the exposure of massive corruption being perpetrated by NDDC officials and APC leaders.

“It is revealing that Pondei could go no further in the face of scathing revelations of direct pillaging of resources meant for the development and welfare of the Niger Delta people, in an unbridled corruption racket, in which the Minister of Niger Delta Affairs, Godswill Akpabio, also stands accused.

“It is rather curious that Prof. Pondei slumped after lawmakers demanded that he offers explanations on the contentious payment of billions of naira, alleged unbudgeted sums, to certain companies by the NDDC.

“This is particularly as Nigerians recall that the embattled NDDC boss had, last week, stalled proceedings by challenging the legislators and walking out on the House of Representatives investigative panel,” the PDP said.

The opposition party further stated that the situation in the NDDC is just a tip of the iceberg on the humongous corruption, looting spree and concealments going on in ministries, department and agencies of government being perpetrated by APC leaders and their cronies.

The PDP restated their submission to President Muhammadu Buhari to immediately suspend the Minister of Niger Delta Affair, Akpabio, as well as disband the NDDC Interim Management Committee (IMC), if he indeed desires the coordinated probe he ordered to yield any credible results.

The party urged President Buhari to note that the people of the Niger Delta region, who are being deprived of their welfare, are following the development with keen interest.

Moreover, the entire nation and indeed the global community are watching the handling of the NDDC as well as the Economic and Financial Crimes Commission (EFCC) fraud saga by the Buhari administration.

The party said they are watching the unfolding drama, the rigmarole and veneers of concealments by corrupt officials and APC leaders.

“Mr. President must note that the malevolent odour of corruption oozing out of his administration is too odious to be swept under the carpets,” PDP said

Armed protests being planned at all 50 state capitols, FBI bulletin...

FG promises to protect Nigerians against the looming recession