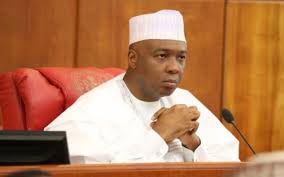 The Peoples Democratic Party (PDP) has congratulated former President of the Senate, Senator Bukola Saraki, on his 58th birthday.

The party, in a statement by the National Publicity Secretary, Kola Ologbondiyan, described Senator Saraki as an exceptionally courageous leader, excellent administrator and brilliant legislator whose commitment to the unity, stability and development of our country has remained unshaken.

“Over the years, Senator Saraki has continued to make sacrifices for the wellbeing of humanity as well as the development and entrenchment of good governance in our country both in private practice as a medical doctor as well as in public life as governor of Kwara state, senator of the Federal Republic, President of the Senate and now as a loyal party man.

“The landmark legislations, including the amendments to the 1999 Constitution and other relevant laws in pursuit of good governance and much-desired electoral reforms, stand him out as a patriot, who put the wellbeing of the nation over and above individual, group or sectional interests.

“Moreover, his commitment towards the effort to rescue our nation from the stranglehold of misrule, including as Director General of our 2019 Presidential Campaign Council; with resounding success, and now as the Chairman of PDP National Reconciliation and Strategic Committee, demonstrates his loyalty to our party and our nation in general,” PDP said.

The party saidxit identified with family members, associates, friends and well-wishers in celebrating Senator Saraki and praying God to grant him many more years so that “our nation and humanity in general will continue to benefit from his wealth of experience and selfless service.”

#EndSARS: Hoodlums cart away 110 tractors, others from farmers’ warehouses

NCC commiserates with Board chairman on daughter’s death