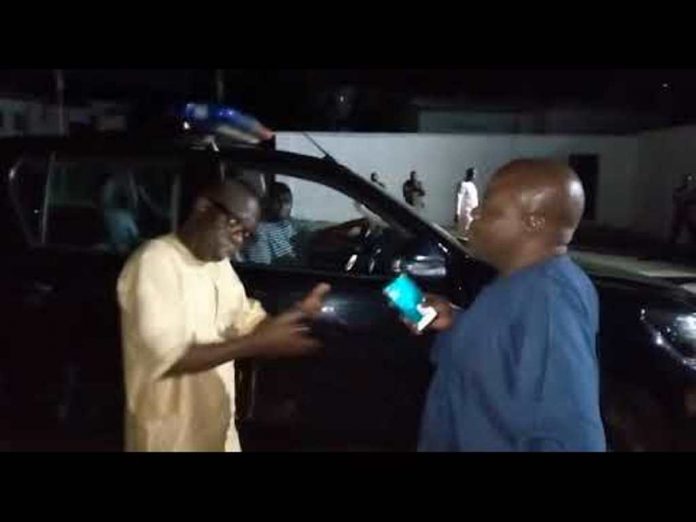 The Peoples Democratic Party (PDP) has told the All Progressives Congress (APC) and the Nigeria Police to stop fighting a lost battle, as nothing can stop the imminent mass defection from the fizzling APC to the PDP across the country.

The party in a statement by the National Publicity Secretary, Kola Ologbondiyan, said Saturday’s despicable attack on Ondo Deputy Governor, Agboola Ajayi, by the APC, using the Ondo State Commissioner of Police, Bolaji Salami, had further spurred Nigerians in their irrevocable determination to abandon the sinking APC and move into the PDP.

The main opposition party in the country further stated that the thoughtless and rude attempt to use the Police to stop the Ondo Deputy Governor from leaving the disorganized APC is symptomatic of the last  kicks of a degraded and derelict political party that is now clutching at straws and can only resort to use of compromised security agents as face-saving measure.

“The APC is unnerved because Nigerians are no longer ready to stomach the deception and lies of 2015 as well as the impunity, political brigandage and the electoral fraud of 2019.

“This is because the situation in the country in the last five years have left no one in doubt that the APC is an ill wind; a soulless mob; a decrepit ship of insatiate pirates, political vampires and ravenous power mongers, who thrive in lies, deception and treasury looting; and whose only legacies are economic ruins, institution of poverty, escalated insecurity, confusion, divisiveness, humongous corruption, dissipated reserves and accumulated debts

“It is therefore a natural national course for democrats in the APC, who have realized that the sinking party is completely irredeemable, to leave the APC in droves with their supporters,” PDP said.

The party added that “it is imperative to state that this development is sparking jubilations in every corners and crannies across our country.”

The PDP, therefore, “cautions the Nigeria Police and other security agencies to note the tide and not allow the APC to use them as pawns to fight an already lost battle against Nigerians.

“Our party charges the Inspector General of Police, Mohammed Adamu, to immediately insulate his officers and ranks from politics. He should instantly call the Ondo state Commissioner of Police,  Bolaji Salami, to order as his actions are capable of pitching the police against the people and cause a breakdown of law and order.

“Our party reminds IGP Adamu of the inglorious tenure of his predecessor in office, Idris Ibrahim, who allowed himself to be used against the people and how his career ended in ignominy.”

The party also stated that the IGP Adamu  must note that Nigerians have not forgotten and are no longer ready to accept the kind of atrocities that characterized previous elections under the APC, including the use of Police helicopter to assault and chase away voters in the November 16, 2019 Kogi state governorship election.

The party said Nigerians were aware that despite the exposed ignoble roles played by unscrupulous security agents in the Kogi and other elections under the APC, no redressing action had been taken till date by the current hierarchy of the police to reassure the people.

The party also called on the Police IG to immediately rein in his men and be on the side of the people, particularly in the forthcoming Ondo and Edo states governorship elections.

NIDCOM calls for investigation into killing of Nigerian in Ireland