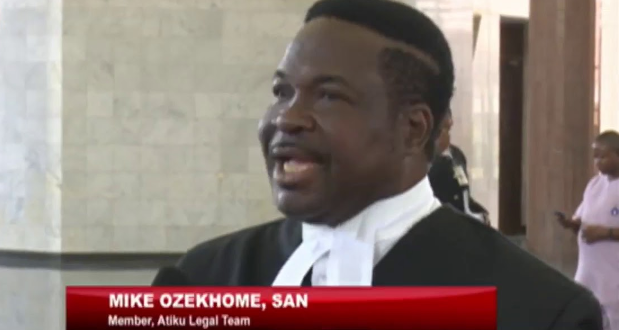 A Senior Advocate of Nigeria (SAN), Chief Mike Ozekhome, on Wednesday, described the appointment of the acting Inspector General of Police (IGP) Usman Alkali Baba, as unconstitutional and illegal.

Ozekhome argued that Baba’s appointment negated the provisions of Federal Character as enshrined in the 1999 constitution, as amended.

He stated this in a statement entitled: “Buhari’s Northernisation of Nigeria Police.”

He argued the President lacked the power to single handed appoint the IGP.

He said the President could only appoint an IGP in conjunction with the Nigeria Police Council comprising Mr President as chairman, all the 36 state governors, the chairman of the Police Service Commission and the IGP.

He said that the appointment of Baba, as the acting IGP “is capricious, arbitrary, whimsical, unconscionable, illegal, unlawful, wrongful and unconstitutional.”

He wondered why the President chose to ignore and disrespect the Federal Character principle enshrined in section 14(3) of the 1999 Constitution.

He stated that the appointment of DIG Usman Alkali Baba, a northern Muslim, as acting inspector-general of police, was to replace Adamu Mohammed, another northern Muslim.

He said: “With Muhammad Maigari Dingyadi, another northern Muslim as the minister of police affairs, the circle of policing in Nigeria is complete.

“Of course, Buhari controls the police by virtues of sections 214, 215 and 216 of the 1999 Constitution. It is the same situation with the ministry of petroleum resources and NNPC, the entire security architecture of Nigeria, and other key sectors and commanding heights of the economy.

“The illogical and puerile argument is always that the president only appoints people he can trust and that such persons are qualified in any event. That argument is insulting and insensitive to the intelligence, sensibilities and plurality of Nigeria.

“Can’t President Muhammadu Buhari for once, just for once, in his opaque appointments look beyond his religion and immediate and forsake sectionalism, cronyism, prebendalism, tribalism, favouritism, and act as a true statesman?

“Is he truly saying he cannot trust any of the other over 15 million Nigerians who voted for him, or that he cannot find any of them that is qualified to be made an IGP?”

No plan to reverse privatisation of power sector — Senate

“You’re an affliction that will never rise again” – Mimiko tells...