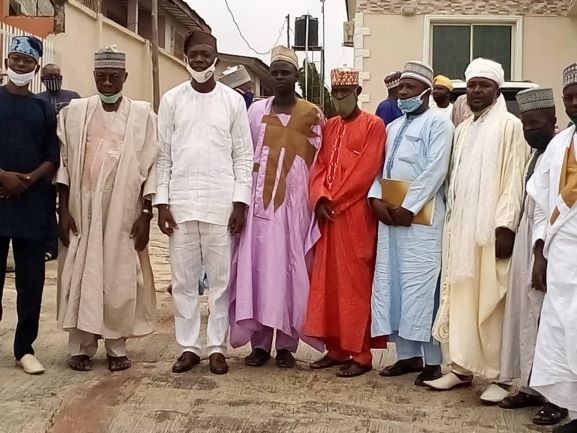 By Richard Akintade, Osogbo
The Special Adviser to Osun State Govenor on Civic Engagement, Hon. Olatunbosun Oyintiloye, has urged Hausa communities  in the State to  demonstrate its support for Governor Adegboyega Oyetola’s Government to enhance effective administration and adequate dividends of democracy.
Hon. Oyintiloye stated this while speaking at a meeting  with all the leaders of Hausa communities across the State, held in Osogbo, the State Capital.
The Special Adviser appreciated them for supporting the Government at all levels in the State, adding that their inpact in the smooth running of Government could not be undermined.
He said he believed  that the Association of Sheriki Hausawa was up to the task of  maintaining peace between their members and entire Osun people.
He further disclosed that the administration of Governor Adegboyega Oyetola was running an all -inclusive government, stressing that in a  democratic setting, citizens were more powerful than the Government.
He said citizens had the right to request for their eentitlemens.
Hon. Oyintiloye therefore urged the body of Sheriki Hausawa to advise Government where necessary, stressing tthat members should see themselves as Osun indigenes.
The Special Adviser also charged them to register all their members including those that were just arriving the State, saying  by so doing, the security of people would be guaranteed and this would  help to protect even the miniing sector in the State.
Secretary, Association of Sherikin Hausawa in the state who also doubles as the Sherikin Hausawa of Ede land, Alhaji Gambo Ibrahim, who spoke on behalf of other Sherikis, disclosed that Hausa communities would continue to support Governor Oyetola’s administration even as most of their demands had  yet to be met.
Alh. Ibrahim took the opportunity presented by the occasion to, again, present some of their demands, prominent among of which is offer of political appointments in the administration of Governor Oyetola for their members, citing Kano, Kaduna and Yobe states where Yorubas are currently serving as cabinet members.
While  urging Mr Governor to have another look at their needs, Alhaji Gambo restated their readiness  to continue supporting the government and  ensuring that, Governor Oyetola achieve total success in his administration.
He equally charged every citizens including Hausa communities to always verify thoroughly before admitting strange persons into their  houses  to adequate   security of lives and properties in the State.
Present at the meeting were the Coordinating Director, Ministry of Information and Civic Orientation, Mr Adebisi Popoola, Director, Grassroot and Public Enlightenment in the Ministry, Mrs Boade Shaniyi, Director of Administration in the Ministry, Mrs Nike Oladimeji, Director, Press and Public Relations, Mr Gedion Adegboye, Sherikin Hausawa across the State among others.
Please follow and like us:

Why Niger Delta remains in ruins despite N4t benefits transfer