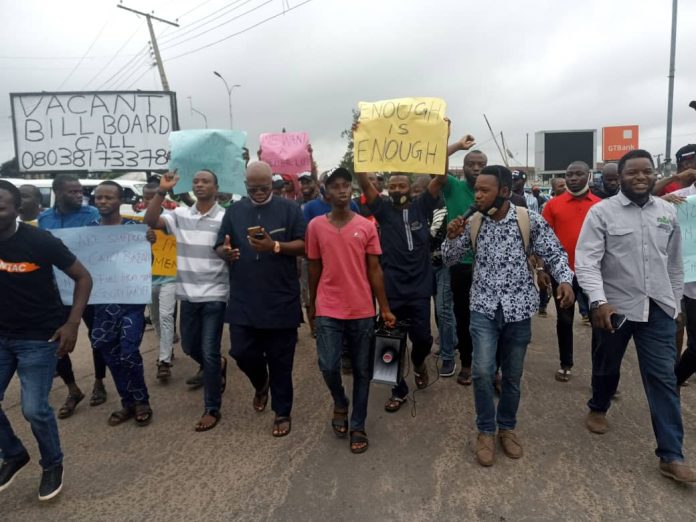 A coalition of Civil Society Organisations in Osun State on Friday staged a protest against fuel price and electricity tariff hikes in Osogbo, the state capital.

The protest affected commercial activities in the state due to the traffic gridlock as protesters blocked all major streets in Osogbo.

The protesters moved from the popularly Nelson Mandela Freedom Park through Oke-fia to the popular Olaiya Junction in Osogbo.

According to the protesters led by Comrade Waheed Lawal, “approval of the new electricity tariff and increment in the pump price of petrol are the highest levels of insensitivity, inhumaneness and wickedness from tge President Muhammad Buhari- led administration.

“We are now giving Mr President five day- ultimatum to reverse the increment on both the electricity tariff and petrol price.”

Meanwhile, some motorists who spoke with our correspondent in Osogbo condemned the increase of fuel price and electricity tariff by the President, saying it was uncalled for at this point in time.

“President Buhari must pity the masses most especially the period we have all passed through since March this year over the COVID-19 19 pandemic from which everybody is just settling  down (trying to adjust, readjust and refocus).

“The All Progressive Congress, APC-led administration in the country has disappointed the entire people with the hardship inflicted by President Buhari.

“He should help us to reverse the increase as a matter of urgency if he knows he is the people’s leader” they concluded.

Nigerians can now travel across 160 countries without Visa – Agency

NUPENG, PENGASSAN direct members in Chevron to shut down operations

The Lies They Tell Against Ortom, By Nathaniel Ikyur