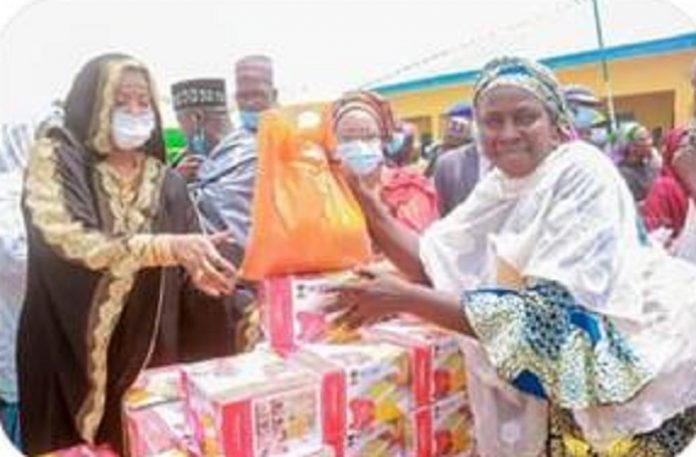 It is simply heartless and insensitive for a news medium in the cadre of Sahara reporters to make a callous mistake in a manner it misrepresented a clean hearted and grass rooted gesture to the rural community women in Bauchi State. It is almost juvenile for the news medium to descend to such low without cursory checks to ameliorate rudimentary mistakes.

The publishers of Sahara Reporters published that the 1st lady of Bauchi State distributed pure water sachets as relief materials to rural women in Bauchi State.

In actuality, what was distributed through the 1st lady’s foundation – Al-Muhibbah – were start-up materials for rural women who had expressed interest in starting a business of their own. Many of the women expressed interest in starting up a pure water retail business, some preferred flour-grinding business, etc. Flour-grinding machines were distributed following a training session on how to operate the machines. Bags of water were distributed to the women as requested by them.  Some others were trained on other skills and given cash. 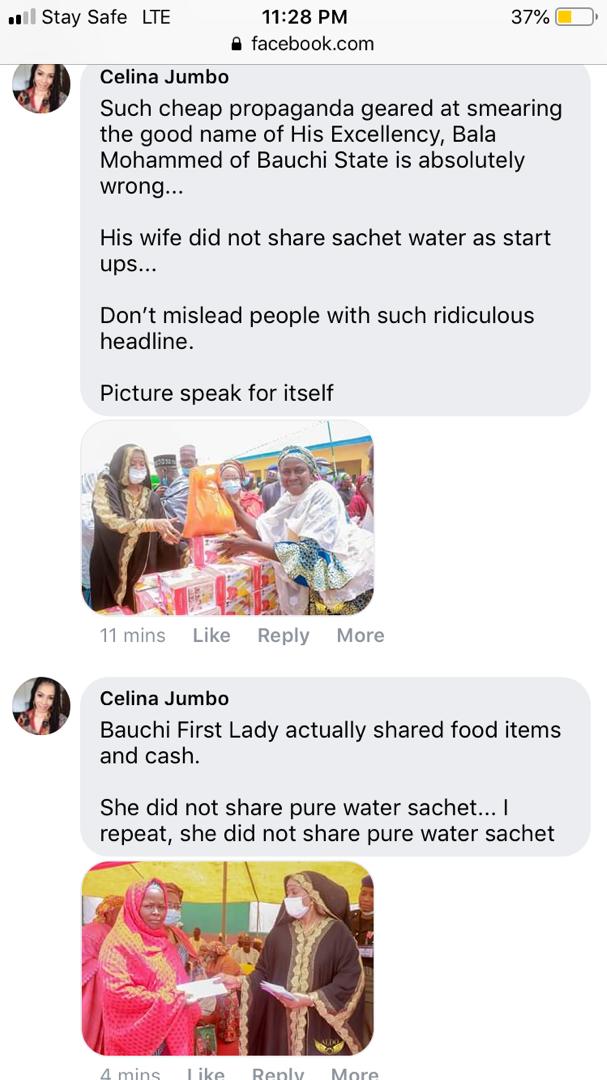 But the publishers of Sahara Reporters opted for a cruel comedy. The publishers chose to highlight the distribution of sachets water to score a comical point. A shame.

As a caveat, the 1st lady of Bauchi State, Hajiya (Dr) Aisha Bala Mohammed is the founder of the Al-Muhibbah Foundation since thirteen [13] years ago with offices located across the regions of Nigeria and in Ohio State in the United States of America. She has used the Foundation for philanthropy over the years to benefit community women and children.

Al-Muhibbah Foundation (AMF) is a non-governmental organization established to serve as means of an integrated life support for the general wellbeing of the less privileged in the society, especially women, children and the youth, addressing their problems and needs. Al-Muhibbah Foundation implements its activities at the grassroots level, using community-based approach.

Through Al-Muhibbah Foundation, over ten ambulances were donated to various local governments in Bauchi State as well as in Abuja. The Foundation pays school fees for orphans and vulnerable children, distributes educational materials, rehabilitates schools and trains teachers especially teachers from schools of children with special needs. Donation of drugs and medical equipment to hospitals and healthcare centers; and, assist in paying medical bills for those that cannot afford.

Recently on June 12, 2020, Al-Muhibbah Foundation visited Makeran Shuwa IDP camp to provide relief items to the IDPs. Donations made included – food items, clothing /footwear, entrepreneurial items aimed at empowering women. The number of households in the camp was ninety (90) with a population of 850 with women and children in majority.

Through the years, the 1st lady had engaged in countless philanthropic gestures, too numerous to enumerate exhaustively. Her experience has served her well. Most of her efforts have become grassroots-based rather than mere donations of items without knowing what the real needs of the recipients. She has become sensitive to knowing the needs of the recipients prior to embarking of distribution of palliatives and/or relief items.

On the issue around the Sahara Reporters’ cruel representation:

On the day in question, The Al-Muhibbah Foundation empowered the people based on what they had requested. Before the visit by the Foundation and subsequent empowerment which was misrepresented by Sahara Reporters, officers of the Foundation were sent to the communities to ask the people (particularly the women) what they want. And the people were given precisely what they requested. Some people asked for bags of sachet water to start up their water business, rather than source startup capital on credit, and they were given. Others asked for a flour machine. Those who requested a flour machine were trained, and the machines were handed over to them. 150 people were also given cash. All these happened yesterday.

The Foundation also went on a Medical Outreach – with over a hundred thousand free medicines for children.

On the same day in Alkaleri local government in Bauchi, The Al-Muhibbah Foundation commissioned a skill acquisition centre for fifty women in sewing, knitting, salon services and the use of the computer to encourage the women to come into information technology. Still yesterday, the Foundation flagged off a Not-Too-Late-to-Learn Programme for older women to get them back to school. Recently, in partnership with Fidelity Bank, over 3,000 women were catered for in Misau LGA under another medical outreach programme. All these were done under The Al-Muhibbah Foundation.

* Okeke is a staff member of the Foundation.

Professor Emovon, former minister of science and technology, passes on

Chieftaincy Crisis: Is Deji of Akure the Prescribing Authority over the...

Nigeria and the Coup Epidemics, By Olusegun Adeniyi

The Mago-Mago in Magodo! By Olusegun Adeniyi