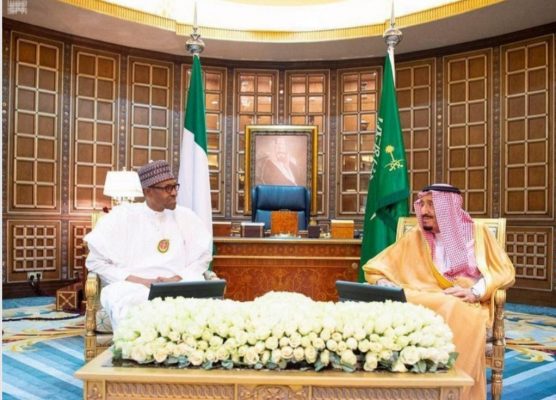 Buhari with Saudi Crown Prince
President Muhammadu Buhari’s four-day visit to the Kingdom of Saudi Arabia came to an end on Saturday. The President participated in the Future Investment Initiative, which was christened “Davos in the Desert”. Apart from attending the summit, which had a debating format for global leaders, investors and innovators to  compare notes and share ideas, President Buhari held extensive talks with the Kingdom’s rulers, King Salman bin Abdulaziz and his son, the powerful Crown Prince Mohammed bin Salman, MBS. The Presidents meetings with the two prominent rulers marked an important upswing in relations between Nigeria and the Kingdom of Saudi Arabia.

As part of his engagements at the FII, President Buhari joined Presidents Mahamadou Issoufou of Niger Republic and Uhuru Kenyatta of Kenya in a plenary session to discuss the topic: ‘‘What’s Next for Africa? How will Investment and Trade Transform the Continent into the Next Great Economic Success Story?’’.  In his arguments, President Buhari said the vigorous implementation of key reforms by his administration in oil and gas, farming and agriculture as well as the country’s vast human resources, made mostly of “young men, women and able-bodied persons” and the country’s rich land and mineral resources eminently positions her for substantial capital inflows. He said the economy holds great promise of win-win for investors.

The President highlighted some key achievements of his administration and expressed a strong determination to use agriculture and ICT as vehicles to attain the target of lifting 100 million Nigerians out of poverty in the next ten years.

On the sidelines of the conference, President Buhari held strategic meetings with the leadership of Saudi Oil and Gas group, the country’s Sovereign Wealth Fund and Public Investment Fund, PIF. On the directive of the King, who had a meeting with the Nigerian leader to discuss friendly and strategic relations between both countries, the world’s largest oil operating company, ARAMCO came to ask the President and his team a simple question: “What can we do for you?’’

In response, President Buhari requested ARAMCO to visit Nigeria and carry out a diagnostic assessment of the Nigeria National Petroleum Corporation’s (NNPC) refineries, pipelines and other infrastructure. He wanted ARAMCO to deploy its technical expertise “to improve the efficiency of the oil and gas industry in Nigeria.” The company’s Chairman, Yassir Al-Rumayyan, who doubles as the head of the PIF, expressed the company’s determination to promote business investment through the use of modern technology across the energy sector in Nigeria. For those who know, the head of the Saudi PIF has the capacity to invest five billion dollars in a country within a month.

The President instructed the Minister of State, Petroleum Resources, Timipre Sylver, Minister of Industry, Trade and Investment, Niyi Adebayo and GMD of NNPC, Mele Kyari to work with the Saudi Arabian investment company to expedite action on modalities for collaboration and actualization of the aspirations of the leaders.

Another meeting of great significance, which was almost missed due to scheduling difficulties, but eventually took place because of  strong interest on both sides was between the United States team to the FII and President Buhari. The American Treasury Secretary, Steven Mnuchin, who was accompanied by Brent Macintosh, Under Secretary of the Treasury for International Affairs and Marshall Billingslea, Assistant Secretary for Terrorist Financing in the United States Treasury Department, were on their way to the airport but they had explored an opportunity to meet with President Buhari no matter how short. They turned back to meet with the President when a space was found in his schedule, albeit late evening.
At an hour when most members of his delegation had retired to their accommodations after a long day of meetings, President Buhari hosted the U S team, with the Minister of State, Petroleum  and GMD of NNPC.

Whether this is a response to the Russia-Africa summit in Sochi, as argued by some critics matters less to President Buhari. For him, anyone who has money and shows a willingness to help Nigeria overcome her infrastructure deficit is welcome. The President told the Americans that Nigeria will leverage on the U.S facility to address current challenges confronting her power sector as well as general upgrade of infrastructure. President Buhari thanked the U.S government for supporting Nigeria’s anti-terrorism efforts.

For the Nigerian President and his delegation, the game changer in all of the engagements was the iconic meeting with the Crown Prince, Prince Mohammed Ibn Salman who, in a special gesture and company of two others, entered the President’s suite in Ritz Carton. The Prince had offered to visit the President, instead of receiving him.

Both leaders reviewed the historically strong and friendly relations between the two countries and looked at ways through which it can be formalized. President Buhari and Prince Mohammed Ibn Salman, also known as MBS, agreed to set up a joint Saudi-Nigeria Strategic Council. This Council will be made up of government officials and businessmen from both countries and the areas of focus are: economic growth and development, investments in oil and non-oil sectors, and security cooperation. The Saudi-Nigeria Strategic Council will hold meetings twice every year. The leaders of both nations will meet at least once a year to examine progress made on decisions reached by the joint council, and take decisions on strategically important issues.

President Buhari and Prince Mohammed Ibn Salman instructed that the first assignment for the council, which is to be in place within two months, will be to establish a legal and operational framework that will facilitate investments. They also discussed regional and international developments, and in particular issues in oil and gas, and challenges of international terrorism. On oil and OPEC, Prince Mohammed Ibn Salman requested that Nigeria should stay within the quota in production.

President Buhari and the Crown Prince shared the view that with the collapse of ISIS in Iraq and Syria, the next frontier for terrorism is the Sahel region, with both leaders agreeing that the problem had grown beyond the region, and needed global leaders to come together and deal with it. Prince Mohammed Ibn Salman said he was ready to lead a global awareness campaign on the issue.

At the end of the meeting, the Crown Prince, who needed to be fully assured of the commitment from Nigeria asked another question: “Should we tell the public?’’ To which President Buhari answered, “Yes!”

Members of the Nigerian delegation, made up of the Governors of Borno, Prof. Babagana Umara Zulum, Katsina, Aminu Bello Masari and Kebbi State, Atiku Abubakar Bagudu and Ministers of Communication and Digital Economy, Isa Alli Pantami, Minister of State, Petroleum, Timipre Sylva, Minister of Foreign Affairs, Geoffrey Onyeama and Minister of Industry, Trade And Investment, Adeniyi Adebayo engaged business leaders with varied interests and pulled off, in many instances, potentially important deals.
Adebayo’s engagement with various Investment Funds including Asma Capital funded by Saudi Pension Fund, Saudi Investment Agency as well as Sultan of Brunei and Kingdom of Bahrain are among prospective and noteworthy ones.

President Buhari’s trip has ushered in a new age of strategic cooperation between Nigeria and Saudi Arabia, pushing relations to an upward trajectory that promotes cooperation in investment, trade, security and Intelligence and counter terrorism.

As Gbadebo-Smith “Mr Reformer” returns to NISER, By Yusuf Kazeem