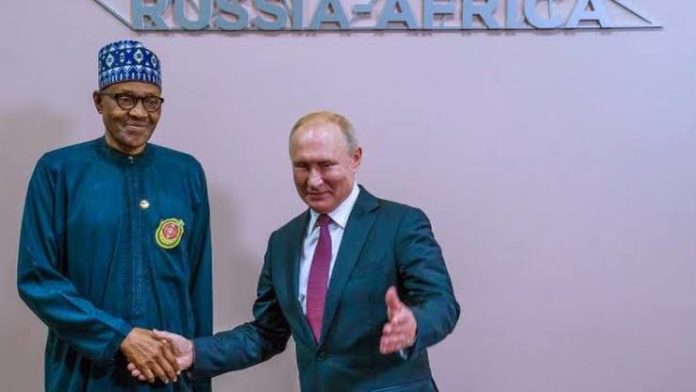 Buhari and Putin
I once wrote: ‘’There is no morality in global politics. It is eat or be eaten. The nucleus of international relations, beyond the niceties of diplomacy, is interest. Substantially, foreign relations are a trade of interests. Nothing is given for nothing. Every country seeks its own even in the extension of charity to another country.’’

What is Russia’s interest in Nigeria – Africa? Well, the interest of outsiders in Africa has always been the same – to plunder the continent. It is the same as that of the conveners of the Berlin conference of 1884-1885, who arrogantly arrogated to themselves the task of shaping the future of Africa by their own greed and lust for glory.

On the surface, Russia’s interest in Nigeria is economic and political. Russia, or rather, the former Soviet Union had strong imprints on Africa – during the Cold War Era – before its subsidence in 1991. In fact, the continent was the theatre of the so-called ideological war between the US and the Soviet Union. Most of the casualties of this proxy combat were from Africa.

For example, the clash of Soviet and US “atomic” interest in the Congo precipitated the slaughter of President Patrice Lumumba in January 1961.

As a refresher, here is how this felony is synopsised by the Atomic Heritage Foundation.

“The Soviet Union, too, saw opportunity in Lumumba, and the ground was set for a proxy war that would last five years. The main concern for both nations was not the wellbeing of the Congolese people or even financial gain. Rather, both nations were worried that the rich uranium mines in the southern areas of the Congo would come under the other’s control. While both the United States and the Soviet Union had uranium deposits of their own, the uranium located in the Congo was extremely valuable given its high quality. In fact, a majority of the uranium used in the “Little Boy” atomic bomb came from the Congolese mines.

After being denied Western aid to control rebel factions in the south of Congo, Lumumba turned to the Soviets, who provided him with weapons and military advisors. This decision worried officials in the United States, who now believed the budding nation would officially turn communist. Doing so would provide Moscow with crucial uranium deposits, while depriving the United States of their most prosperous overseas mines. In a backchannel coup, United States military advisors helped Mobutu and Belgian operatives overthrow Lumumba.

Lumumba was then arrested and transported to Katanga, where he and several other of his supporters were summarily executed.”

Really, Russia’s interest in Nigeria is obviously not altruistic. The Eastern European country is staging a comeback to the epicentre of global politics, and Africa must bend its back for Russia’s ride to “reckoning”. President Putin has not masked his intentions of restoring the “Soviet-era influence and glory”. And Nigeria (Africa) is an important piece in this quest. Africa has always been a sport for the East and the West.

With the growing influence of China in Africa and the receding hold of the US on the continent, Russia is spoiling for a place under the African sun.

On the economic sphere, Russia is a late-comer in trade with Africa – with just $20 billion in trade with the continent in 2018 unlike China’s $200 billion and the US’ $61 billion in the same year. But the country is playing catch up with the recent summit with African leaders in Sochi and previous rapprochements.

But what is Nigeria’s interest?

President Buhari says his administration will “inject fresh energy into Russia-Nigeria relations”, and he calls for a “stronger partnership” with the country. As a matter of fact, this “renewed” camaraderie leaves me with mixed feelings. Nigeria is fighting a war – against insurgency – and needs weapons. And of course, Russia transacts business without scruples and conditions. We need Russia because we need the weapons. So, strengthening our ties with the country is not such a bad idea.

Also, Russia has little regard for principles, norms or rules in business and politics. It does the deal and delivers the goods.  This is a political character it shares with China.

But is the growing influence of countries like China and Russia that put nugatory value on the rule of law on Nigeria not ominous?  And could Nigeria be dragged into a tug between two long-time adversaries – US and Russia?

Well, I think, the US under Donald Trump may be too carefree to care about what is happening in Nigeria or Africa. After all, it is, “America first”.  But I recall what an American official told me earlier in the month in a conversation on US’ apathy towards Africa. He said: “Anywhere Russia enters, America’s interest is awakened”.

However, with the growing influence of China, and now Russia on Nigeria, we should not take the execrable examples of “democratic dictatorship” from these countries. That will be our ruin.
China cares little about the internal politics of other countries, but Russia is notorious for propping dictatorships.
This should worry us.

*Fredrick Nwabufo is a writer and journalist.

Why Nigeria placed a ban on cryptocurrencies- Agba

NDIGBO: THE REALITY OF A VIRTUAL NATION IN THE DIASPORA, By...

Where Life is Two for One Kobo! By Olusegun Adeniyi