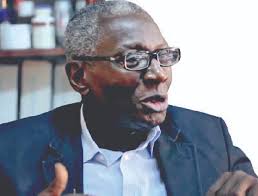 The 2020 Appropriation Bill was laid before the National Assembly on October 8, 2019, by President Muhammadu Buhari, who also instructed all Heads of Ministries and key Departments and Agencies to make themselves available to defend their respective budgets before parliament. Meanwhile, the National Assembly leadership have suggested that the budget should be ready for the President’s assent before December 31, so that implementation can commence promptly from January 1, 2020. Evidently, such a timely enactment of the budget would be an unusual feat in recent years!

However, notwithstanding the possibility of a timely budget assent, the critical question is whether or not the social welfare, particularly of the 100 million plus Nigerians, who are poor, can be redeemed from their severe deprivations. Instructively, however, any reasonable projection of success must be guided by the potential impact of the strategic mix of variables in the 2020 budget. These variables will, hereafter, be discussed in an interrogative prose, to facilitate comprehension. Please read on.

The N10.33tn 2020 budget is arguably Nigeria’s largest budget so far. Should we therefore expect that government will have more money to spend, to address our huge infrastructural deficit?

Are you saying that we may not expect a significant enhancement in critical infrastructure and social welfare from such a ‘huge’ budget?

In retrospect, if the N6.08tn budgeted in the 2016 budget did not elevate the quality and spread of infrastructure, it would be unrealistic to expect that the lower real value of the 2020 budget will have any meaningful impact, especially when Nigeria’s population has since grown by over 10 million.

Capital expenditure was N2.652tn last year, but decreased unexpectedly to N2.46tn in the 2020 budget. Does this mean that government is not seriously committed to addressing the huge infrastructural deficit?

You are right, it is inappropriate to reduce capital budget, particularly when there is a crying need, nationwide, for better roads, better schools and hospitals, free-flowing potable water, steady power supply, etc.  Regrettably, the net real value of the modest 2020 capital budget will further reduce from N2.42tn to less than N2.2tn, if the current inflation rate of about 11 per cent persists!

Government could, however, demonstrate its commitment to rapid and consistent provision of quality, social infrastructure, if consumption expenditure, which has remained around 70 per cent of annual budgets, since 1999, is significantly reduced. Inexplicably, however, despite the adoption of the Integrated Payroll and Personnel Information System and the alleged elimination of tens of thousands of ‘ghost’ workers from government payroll, recurrent expenditure has, inexplicably, consistently remained very high and will become irrepressible with the adoption of the new minimum wage!

Unfortunately, therefore, the popular expectation for equity in the provision of social infrastructure will remain, just that, unless government sensibly begins to allocate at least 50 per cent of annual budgets to capital expenditure and provision of critical social welfare programmes.

Do you agree that the present debt burden is sustainable?

Although the finance minister has suggested that revenue consolidation rather than debt level is our real challenge, government must restrain itself from further debt accumulation, particularly, now that over N50 out of every N100 aggregate revenue is consumed by debt service! This year (2019), for example, total debt service charge was N2.14tn, while debt service has increased to N2.45tn in 2020 budget. In practice, external debts are generally more hazardous in fragile economies, like ours, and it is therefore disturbing that total foreign debt doubled to about $22.08bn in the last four years. Foreign debt will, invariably, further spike with the latest $2.5bn IMF loan for power infrastructure. Ultimately, we may compromise our sovereignty, with wide open eyes, with an oppressive external debt burden.

Despite the significant shortfall in projected revenue in 2019, government still expects to collect a higher sum of N8.155tn in 2020. Why is government so optimistic about its revenue sources for next year?

Surprisingly, the consistent shortfalls, in revenue projections, in earlier budgets, have never seemed to advise the wisdom of constructive and realistic revenue estimates. Consequently, allocations for critical infrastructure projects will still remain inadequate. The alternative recourse is that government will become compelled to overload an already very heavy debt burden, which future generations will, unfortunately, inherit.

However, in its quest for rapid increase in revenue, government proposes to increase the five per cent VAT rate by 50 per cent to 7.5 per cent. An additional tax will also be levied on beverages and phone calls. Conversely, some critics would suggest fiscal prudence and advise that the present bloated and disproportionate cost of running government should be significantly pruned to make politics unattractive as a business.

Other critics have similarly decried the increasing tax burden on Nigerians, particularly, when victims of poverty have steadily increased beyond 100 million. In order to reduce this yoke, perhaps, government will be better advised, to actively concentrate on retrieving the hundreds of billions of dollars which have been stolen and continue to be, reportedly, stolen from government’s porous treasuries annually. Such potential revenue sources include the alleged $100bn outstanding debt owed by some oil majors operating in the Niger Delta. There are also reports of over $60bn stolen oil cargoes from Nigeria which have been traced to Ports of Discharge in the USA and elsewhere.

Furthermore, the liberated loot from corrupt politicians and civil servants is always also hard to trace in annual budgets. Similarly, hundreds of millions of dollars recovered from Swiss banks and other safe havens, for example, have not been publicly accounted for, while another $7bn, untenured interest-free advance to some Nigerian banks in 2006 still also remains outstanding!

Curiously, there is no allocation for petrol price subsidy in the 2020 budget. Does this mean fuel subsidy will be abolished?

Fuel subsidy values ranging from N1tn to above N2tn have, for years, been accommodated outside annual budget provisions. Clearly, if this huge expenditure is also captured, the 2020 budget deficit will swell outrageously and either significantly, increase our debt burden or conversely, further erode the modest N2.46tn allocation for critical infrastructure and social welfare support in 2020.

Furthermore, despite the desperate strategies to raise revenue, government is, reportedly, still indirectly subsidising between 10 and 20 million litres of petrol that our ECOWAS neighbours smuggle across the borders daily!

Are the budget benchmarks of $57/barrel and 2.18 million barrels of daily oil output realistic?

Ans: The budget benchmark rate may be 305/$1, but, only favoured candidates can access this rate. The sustenance of multiple rates between N305 and N360/$, evidently, creates distortions in the marketplace. Notwithstanding, if external reserves also dwindle while the current level of insecurity persists, with steady clampdown on free speech, portfolio investors would hastily reverse the dollar inflow and threaten the naira rate. However, the resultant weaker naira rates would also be a bad dream, as it would drive higher inflation rates and higher cost of borrowing to reduce any possibility of economic recovery to ultimately eclipse any hope of diversifying our production base.

Buhari dissolves Governing Board of Citizenship and Leadership Training Centre

US and Nigeria’s Special Shame, By Lasisi Olagunju