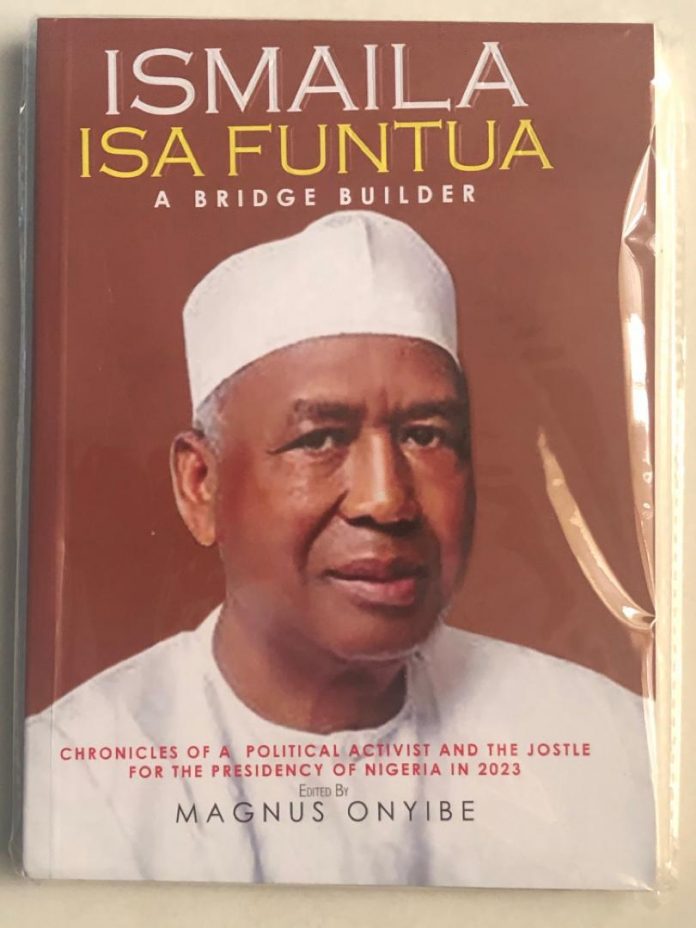 A couple of months after the charismatic political activist, construction entrepreneur and media investor, Mallam Isma’ila lsa Funtua passed away, Magnus Onyibe has published a book titled: “Ismaila Isa Funtua. A Bridge Builder -Chronicles of a Political Activist, and the Jostle for The Presidency of Nigeria in 2023.”

Although the book is in part focused on the elder statesman and his bridge building legacy, both in terms of physical and human relationships, Onyibe, according to a press release, also leveraged the critical role that Mallam Funtua played in Nigerian politics since the 2nd Republic when he served as a minister of the federal republic to his last position as a member of the inner circle of the president of the Federal Republic of Nigeria during the 9th Republic, to dig up and bring to the threshing floor issues surrounding the presidential power sharing calculus between the north and south.

It may be recalled that the late Mallam Funtua’s comments on AriseTv on 3 January 2020, “Presidency is not turn-by-turn Nigeria Ltd”, set off a political firestorm that’s now raging in the political space.

According to the author, the book which is a sort of anthology comprised four chapters.

Both chapters, he said, revealed critical facts about Nigeria from the eyes of Nigerians who had been in and around the corridors of political power in nearly four decades.

According to him, “The views also included are those of his former colleagues in the media, who upon his passage renamed NIJ House after him, and thus triggered another controversy as the gesture and mark of honor became another lightening rod.

“The other two chapters highlight some hidden hindrances to the realistic and practical implementation of the presidential power shift between the north and south equation, and amplify the historical facts to be contended with by those contending for the presidency of Nigeria from 2023 should be ceded to someone of lgbo extraction.”

The author of the book posited that, the nebulous nature of the gentleman agreement between northern and southern politicians entered into during the 1994/5 national conference to periodically swing the presidency between both sides had major short comings in the sharing formula.

Onyibe noted that the flaws in the gentleman agreement were evidenced by the fact that it did not take into consideration how power would rotate within the sub regions.

“Thus, the presidential power rotation calculus is not only inequitably distributed between the north and south, but also faulty because it does not define how it would rotate between the states on the northern or southern sides of the equation that are now hobbled or excluded from enjoying the good feeling of their son or daughter being president,” he stated.

Continuing, Onyibe made the case that a clear evidence of the weakness of the power sharing calculus was that presidential power in the north is currently residing in katsina state where the late President Umar Yar’dua who served as president from 2007 to 2010, and president Mohammadu Buhari , the incumbent president from 2015 till date, with a mandate to serve till 2023, hail from the same katsina state.

He argued that “in effect the two presidents that have served under the power rotation arrangement from the north, are katsina state indigenes.

“The ugly reality of the scenario above is that owing to the limitations of the presidential power sharing agreement, by omission or commission, there is currently exclusion of the rest of the northern politicians in the eighteen (18 ) other states in the north west, north east and north central from the opportunity of producing the president until the next eight (8) years after 2023 when the presidency is supposed to commence its residence in the south. That’s nearly 12 years from now, before presidential power can return to the north, and no one knows any of the 19 northern states that the presidential power pendulum may swing to, when it exits the south in 2031.

“Given the uncertainty that the arrangement is fraught with, and the existential reality intrinsic in the feeling of exclusion being expressed by the politicians in other states in the north, the author is of the view that similar circumstances of feeling of unjustness may arise in the south, as the south west which produced president Olusegun Obasanjo, 1999-2007, may be angling to produce the next president in 2023, if the rumor and media reports about the 2023 presidential ambition of the Yoruba leader, Asiwaju Bola Tinubu, former governor of lagos state and national leader of the ruling party , APC , is anything to go by.”

The author, Onyibe, a former commissioner in Delta state cabinet (2003-2007) concluded that should such a suspected goal or dream of the south-west become a reality, it might further alienate the “lgbos in the south-east, who already, nurse the negative feeling of being treated like outsiders in the politics of Nigeria, even 50 years after the civil war that pitched them against the rest of country had ended, 1967-70.”

Onyibe who played a prominent role in the emergence of the late Umaru Yar’Adua as president in 2007 and is fast carving a niche for himself in writing about contemporary issues in Nigerian politics, is also the author of “Abba Kyari:Portrait Of A Loyalist. The Good, The Bad and The Ugly Sides of Public Service in Nigeria” which is focused on public policy administration in Nigeria, using the late Mallam Abba kyari, ex Chief of Staff to president Muhammadu Buhari as a reference point.

Another book also authored by Onyibe since the Covid-19 pandemic lockdown is titled “Beyond Loss & Grief. The story of Kikaose Ebiye-Onyibe. A Survivor’s guide On How To Cope With The Loss Of A Child”. It is a fathers memoir cataloguing events leading to the loss of Onyibe’s 18 years old precious daughter in a series of medical mistakes in Birmingham, England and Lagos, Nigeria, resulting in her avoidable death in 2017.

The new book anchored on the late Mallam lsmaila Isa Funtua published by lnspire Services Ltd, is focused on politics in contemporary Nigeria and it is expected to generate more excitement among politicians and politically-conscious Nigerians in the already tension-soaked sociopolitical space.

Salah says no team suffers more without fans than Liverpool

Obaseki: Oshiomhole was attacked for visiting Edo without informing me