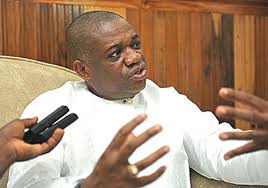 Former Governor of Abia State and Chief Whip of the Senate, Senator Orji Kalu, has lauded the federal government for revamping Onitsha riverport.

This followed the successful completion of a trial barge trip (carrying containers) from Onne Port to Onitsha Port on Tuesday.
Kalu said that the resumed activities at Onitsha seaport would boost economic activities in the South East and ultimately create employment opportunities and wealth for Nigerians.

He commended the efforts of the Federal Ministry of Transportation and the National Inland Waterways Authority (NIWA) on the project.

Kalu stated that with the functioning of Onitsha seaport, exporters and importers would be relieved of the stress of transporting containers by road from different ports to the South East and vice versa.

According to the former governor, “with the commencement of activities at Onitsha seaport, businesses will thrive further in the South East.

“The bottlenecks being faced by exporters and importers will be reduced as containers can now by transported from Onne port and other ports through the waterways to Onitsha seaport and vice versa.

“The activities in the seaport will drive industrilaisation and sustainable development in Onitsha and South East at large.

Kalu noted that the South East has untapped economic potential.

Just In: Magu Released from Detention