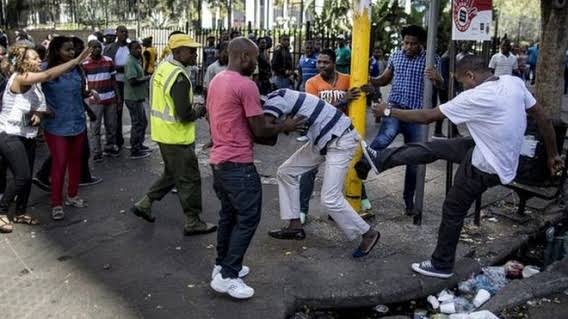 One person has been killed while five sustained injuries in a fresh outbreak of xenophobia in South Africa.

According to News 24, the yet to be identified victim was stabbed with a sharp object at a corner of Bree and Plein streets in Johannesburg.

Armed protesters had marched through the streets on Sunday, demanding that foreigners should return to where they came from.

Some shops were looted during the violence. Kay Makhubele, Gauteng police spokesman, said 16 people were arrested for public violence and possession of stolen property.

The protesters were said to have disrupted a gathering which was being addressed by Mangosuthu Buthelezi, a notable politician and Zulu tribe leader, on Sunday morning.

The politician had gone to speak to residents of George Goch, Denver and Jeppestown hostel, following xenophobic attacks.

The newspaper said the police fired stun grenades and rubber bullets to restrain the crowd when chaos broke out.

Last week, shops and properties of Nigerians and other African nationals were looted and destroyed.

This made Nigeria, Rwanda and Malawi to pull out of the World Economic Forum which held in South Africa. Zambia cancelled an international friendly match with South Africa over the development.

There were reprisal attacks in Nigeria as South African businesses such as Shoprite and MTN were targeted.

Court orders Sen. Ndume to be remanded In prison after failing...

New York prepares for the worst as death toll hits 192