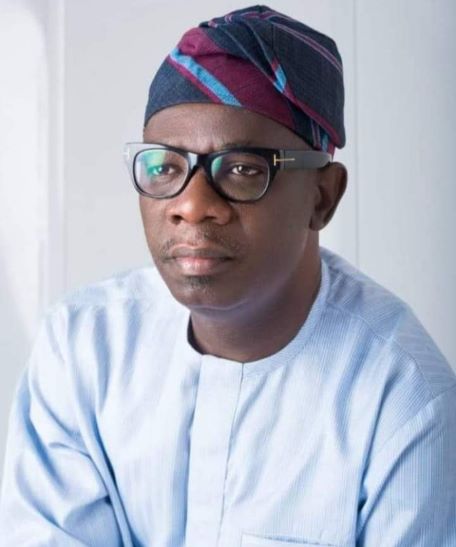 * drops Degree, Law School claims
A top official of the Peoples Democratic Party (PDP) in Ondo State, at the weekend revealed that Mr. Agboola Ajayi, the state’s deputy governor, only submitted his secondary school certificate as a sole qualification to contest in next Wednesday’s governorship primary election of the party.
The deputy governor, who recently defected from the ruling All Progressives Congress (APC) to the PDP, has come under accusations that his Law degree and Law School certificates were falsified.
Confirming that Ajayi only submitted his secondary school certificate, the top official who would not want his name mentioned, said, “And that is the minimum academic qualification required by the Constitution to run for any public office.”
But unimpressed, one of PDP’s pressure groups in Ondo State, queried the rationale behind Ajayi’s decision not to present his degree qualification in Law from the Igbinedion University, Okada, Edo State, and the obtainance of a Law certificate from the Nigerian Law School, Abuja.
The group, Sunshine Redemption Group (SRG), in a statement by its chairman, Mr. Emmanuel Agbara, and secretary, Chief Ebiemi Williams, said it was now vindicated in its earlier allegation that Ajayi did not possess the degree certificate and the Law school certificate he submitted to the Independent National Electoral Commission (INEC) to contest as deputy governor in 2016.
“The whole world can now see that the deputy governor is liable to forgery and perjury prosecution, having used two sets of certificates to go to the House of Reps and the office of deputy governor, only for him to now abandon them simply because their authenticity is in contention.
“The truth is that, PDP risks a potential jeopardy in the candidature of Agboola Ajayi, if he is allowed to contest for the party’s governorship ticket next Wednesday.
“If he is sure that he graduated from the University and the Law School as he officially claimed in the past, let him submit those certificates along with his school cert.; but we know he dares not,” the group averred.
Urging the PDP leadership to disqualify Ajayi, the SRG said the demand was neither sentimental nor parochial, but a germane one.
“In the first place, the main issue for the cancellation of his victory into the House of Representatives by the Ondo State Election Petition Tribunal in 2009 has not been fully discharged.
“The tribunal upheld the allegation that he sent mercenaries to write his school certificate examination in a secondary school in Mobolorunduro, while he was chairman of Ese-Odo Local Government, in 2004.
“In the said exam, Ajayi was reported to have fast-forwarded his date of birth from 1968 to 1980, so as to gain qualification to sit for the papers.
“He afterwards went ahead to reverse his date of birth to 1968, through a court affidavit, knowing that his 1980 claim would never fly anywhere.
“All these allegations were upheld by the tribunal to form the grounds for the cancellation of Agboola Ajayi’s victory.
“Although the judgment was later reversed by the Court of Appeal, the appellate court only permitted him to remain in the House of Representatives not because he didn’t commit the offence but because it was a pre-election matter.”
The SRG also cited a petition to the Body of Benchers by a civil society group-Ondo Committee on Ethics and Good Governance, in which the latter accused Ajayi of perjury in the claim that he attended Igbinedion University, Okada, at a time he was occupying various political offices.
“The deputy governor had claimed that he obtained his Bachelor of Law at the Igbenedion University and that he was called to the Bar in 2010, after his graduation from the Nigerian Law School.
“Whereas he was elected between 2007 and 2011 into the House of Representatives for Ilaje/Ese-odo Federal Constituency of Ondo State, which was on a full-time basis, how come he was able to cope at Law School since attendance of the latter too is on full-time basis?” the group wondered.
Meanwhile, ahead of Wednesday’s primary election, the National Working Committee of the party has dropped the contentious ‘doctored delegates’ list’, in favour of the original one.
A top source in the party revealed that the action followed the recommendations of a three-man probe panel headed by a former governor of Gombe State, Alhaji Hassan Ibrahim Dankwambo.
Up until last week, the party had been embroiled in internal crisis, over an allegation that 104 names were substituted in the delegates’ list, and replaced with proxies of the state’s deputy governor, Mr. Agboola Ajayi, who recently defected from the ruling All Progressives Congress (APC) to the PDP.
Though Ajayi denied involvement in the scam, the party, last week, dispatched the Dankwambo panel to Akure, the state’s capital, to solve the riddle.
The source, which craved anonymity owing to the sensitivity of the issue, said, “The Dankwambo panel, after having painstakingly read through the old delegates list and the newly presented one, spotted the 104 illegal names and knocked them off.
“Following this, it returned to Abuja with the original list to be used for Wednesday’s primary, and also made far-reaching recommendations to the NWC.”
One of the recommendations, according to him, is that the old delegates’ list will be adopted for Wednesday’s primary election.
The panel, he added, also appealed that Ajayi, the man in the eye of the storm in the list-doctoring saga, should be forgiven and assimilated fully into the party, despite that he is a newcomer.
(Source: Sharpedge News)
Please follow and like us:

Kalu at 61: From Action Governor to Action Senator, By Kunle Oyewumi