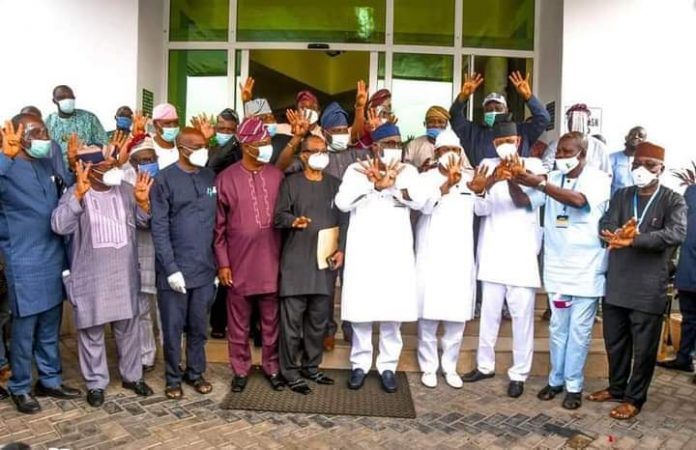 Governorship aspirants who participated in the July 20, Primary election of the All Progressives Congress (APC) in Ondo State have come together to work for the re-election of Governor Oluwarotimi Akeredolu in the forthcoming October 10, 2020 gubernatorial poll.

Leaders of the party, including Governor Oluwarotimi Akeredolu (SAN) and the deputy Governor-designate, Hon. Lucky Aiyedatiwa, met on Sunday to strategize ahead of the August 22nd local government and the October 10 governorship elections in the state.

The Governorship aspirants include; Olusola Oke (SAN), Chief Segun Abraham, Isaac Kekemeke, Esq, and others who were represented.

Briefing journalists after the closed-door meeting, Kekemeke who spoke on behalf of the leaders said the meeting was a clear demonstration that leaders of the party in the state had returned from the battle field to work together.

He said they had all decided to work together as a party so that they could jointly win both the local government and Governorship election together.

He said: “We have decided that our party is bigger than all of us. We have applauded the Governor for his address today wherein he titled a new beginning.

“We have a bigger party. It can only be better. We, as stakeholders have resolved to appeal to our candidate that all internal cleavages are resolved.”

Kekemeke said the unity in party was the beginning of what the people of the state should expect, stressing that the party was ready and prepared to win the coming elections.

“We have resolved to work together for our victory in the August 22nd, local government election and the October 10, governorship election. We will win better than we have ever won before.” Kekemeke stressed.

Earlier at the meeting, Governor Akeredolu called for a new beginning where party cohesion and unity will be the watchword with the ingredients of democratic enterprise inculcated and imbibed.

“Persuasion, negotiation and consensus-building should be the hallmark of the new improved All Progressives Congress in Ondo State.  It must be emphasised that we have a lot to benefit as long as our party remains in government in Ondo State,” Akeredolu noted.

The Governor appreciated all his co-contestants, elders and leaders of the party both at the State and at the National levels, especially the President of the Federal Republic of Nigeria President Mohammadu Buhari, National leader, Asiwaju Bola Ahmed Tinubu,  the National Caretaker Committee under the leadership of Mai Mala Buni, the Governor of Yobe State and others.

CBN Gov to appear before House C’mtee on Tuesday over non-rendition...

Why I sacked Sanusi as Emir of Kano – Ganduje