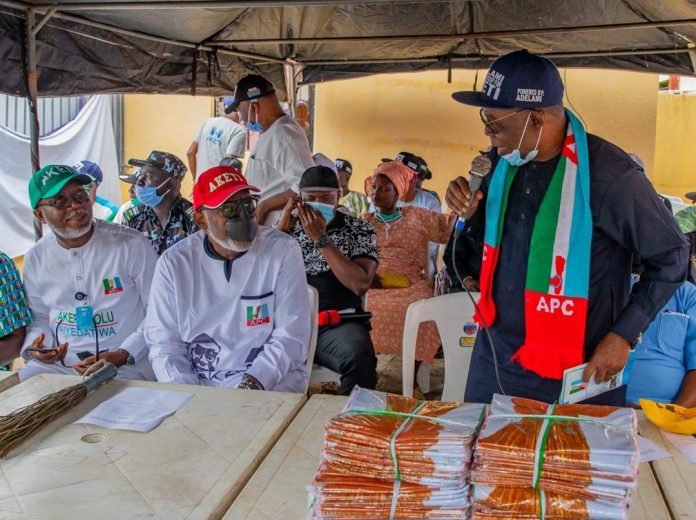 •Says “No Vacancy in Alagbaka”

•Our unity unprecedented In the history of political parties-Akeredolu

Former governorship aspirant in the July 20, primary election of the All Progressives Congress (APC), Chief Olayide Adelami, has handed over his campaign office and entire political structure in the state to the state Governor, Arakunrin Oluwarotimi Akeredolu (SAN).

While noting that there was no permanent enemy in politics but permanent interest, the former deputy clerk to the National Assembly said his interest was borne out of his passion to develop the state and his love for the APC.

He said: ”our interest is the love for our party. All other contestants, over ninety percent of us are with Aketi. Very soon, you will see that wherever our leader (Aketi) goes, we shall all follow. October 10, by the time Aketi is declared governor for a second term there shall be more speeches and celebration. Let me add that there is no vacancy in Alagbaka.”

The state chairman of the party, Engr Ade Adetimehin noted that while other political parties were engulfed in crisis and losing members, the APC was going stronger and solid ahead of the October 10, governorship election.

Responding, Governor Akeredolu described the unity in the party as unprecedented in the history of political parties in the country.

He said the oppositions in the state never expected the the APC would be united as it is, adding that “what has happened was a show of solidarity.”

Governor Akeredolu thanked Adelami for the gesture and his contributions towards the success of the party in the forthcoming election.

Covid-19 will not stop us from providing essential services- Aliyu