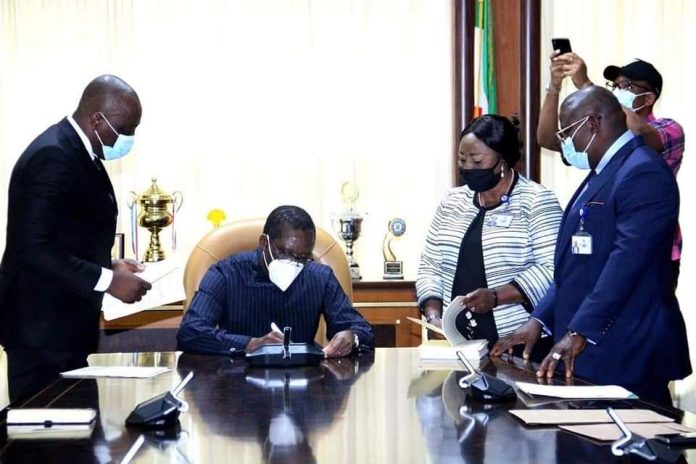 Delta Governor, Senator (Dr) Ifeanyi Okowa, on Wednesday, signed the Bill to eliminate violence in private and public life 2020 and the Delta State Local Content Agency Law 2020, into law, with a charge to the legislature to continue to protect its integrity.

The governor said that both laws would ensure the prevalence of atmosphere of peaceful co-existence in the state.

He commended the state’s House of Assembly for being resourceful and enterprising, saying that it had continued to pass Bills in spite of the tough times the members had had to carry out their functions during the pandemic.

Okowa noted that one of the new laws sought to eliminate violence in private and public lives and to prohibit all forms of violence against persons and provide maximum protection and effective remedies for victims and punishment against offenders.

He said that the law was very important to all families and to the government because it would ensure the protection of women, girls, children and men.

“We realise that to have a decent society such laws must be in place and I believe that this will ensure greater peace and harmony in the home and in the public place.

“Beyond this, it will enable us to live in peace and live like human beings we were created to be, because many times the instincts in man tend to go against the laws of peace.

“By the grace of God, this law will provide enough punishment for all offenders. I read through it and I am quite pleased with the punishments that have been spelt out in the law for people who will be offenders and I urge all Deltans to find time to go through it so that they will be guided accordingly.

“The punishments are real and severe and I hope and pray that all Deltans and all those living in Delta State will conduct themselves in such a manner that will not go on the wrong side of the law,” he said.

On the Delta State Local Content Agency Law 2020, the governor said that it would provide opportunities for transfer of skills and technology to the people and warned against host communities taking laws into their hands.

“We believe that there is a need to begin to think about our people and how to strengthen them.

“In strengthening them beyond creating employment for them, the issues of transfer of knowledge and skills to our people in places of work, and the need for respect for the various communities and our people that they work with is very important.

“This is not just about the oil industry; it includes all industries and business enterprises in the state employing people within the limit of the law.

“I believe that this local content law being domesticated in our state is for the good of our state and for our federation, because once Delta is peaceful, it will contribute her quota to the development of the country.

“Once the community is peaceful, the state is peaceful; we are contributing our quota towards the development of the country.

“It is important that there should be a collaborative effort between the companies that operate in the state and the people in whatever form the company is operating.

“This does not mean that the people should take the laws into their hands and start to create bottlenecks for companies – that is not the wish or the intent of the law.

“I do hope that our people will be cautious and bring whatever complaints they have against the companies to the government,” he added.

Okowa announced that in the next couple of days he would present the 2021 Appropriation Bill to the House of Assembly, and hinted that the Budget would witness a contraction in line with current economic realities.

He added that the state government would continue to work hard to ensure the continuation of projects in spite of the economic effects of the pandemic.

Earlier, the Speaker of the House of Assembly, Chief Sheriff Oborevwori, had, while presenting the Bills for the governor’s assent, disclosed that the Bills passed through all the processes required in making laws.

He said that the scope of the Bills bothered on violence against persons and the development of local skills, manpower development and transfer of technology by operators of companies in the state.

Oborevwori explained that the Bill on persons would effectively regulate the rampart violence against the girl child and women in the society.

“It also seeks to provide for necessary measures with a view to stopping persons from committing crimes related to domestic violence, and makes provision for law enforcement officers to effectively carry out their responsibilities in relation to domestic violence by letting victims know their rights.’’

He listed other benefits of the bill as prohibition of traditional harmful practices, widowhood maltreatment, female circumcision and genital mutilation.

On the Local Content Bill, the speaker said that it aimed at transferring technology and skills to indigenes of Delta State by companies operating in the state.

“The transfer of skills and conscious building of manpower and skilled workforce will lead to employment opportunities in the state, thereby reducing unemployment,” he stated.

African Union condemns Trump’s decision to stop funding of WHO