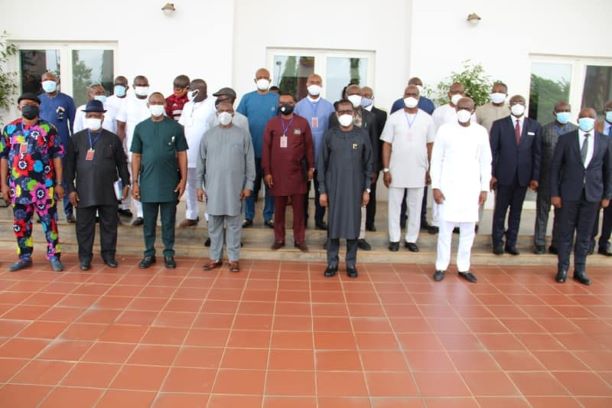 Delta Governor, Sen. (Dr) Ifeanyi Okowa, on Friday inaugurated the State’s Economic Council, with a charge to the members to institute strong, credible and enduring platforms for diversification of the economy, including enhancing business competitiveness.

The Council is headed by the Deputy Governor, Mr Kingsley Otuaro while the Commissioner for Economic Planning, Dr Barry Pere-Gbe, is the Secretary.

At the ceremony in Asaba, the governor urged the Council to proffer viable alternatives to building strong public/private partnerships, formulate policies and practices that promote institutional transparency and accountability, including systematic disclosure of accurate and reliable financial information.

He also tasked the body to ensure predictability of policies that would create confidence in the investing public and provide innovative strategies for expanding the tax base and improving the efficiency of tax administration.

According to him, the council was also expected to initiate reforms aimed at strengthening public financial management systems, including budget management, mid-year budget reviews designed to align annual budgets to emerging scenarios/trends.

Okowa said that the inauguration of the council was in line with the Delta State Economic Planning Council Law Cap D14, Laws of Delta State 2008, explaining that constituting the council was one of the many steps his administration was taking to build a Stronger Delta.

He stated that the council was empowered to formulate and prepare long term, medium term and short term development plans for the state and local governments within the framework of the national objectives and priorities, “and transmit the same to the National Planning Commission.’’

“As with the other sub-national governments and the national government, our economic situation is regrettably still fragile, depending largely on oil earnings and, therefore, vulnerable to price volatility and commodity booms and busts.

“Let me stress that we must continue to improve our credibility rating on issues concerning transparency and accountability, not only among our people, but also in the eyes of the business and investment community if we are to mobilize the level of support and partnership required to actualise our Stronger Delta vision.

“We must also continue to rationalise expenditures, maximise value for money and ensure good project selection to enhance judicious allocation of resources,” the governor said.

Okowa said “Delta did not only surpass the national average on both indices of economic development, but climbed up the rung in the rank of states, especially in the poverty-to-population ratio.”

Lagos led the chart (4.5 per cent) of prosperous states on poverty-to-population ratio followed closely by Delta (6.0 per cent).

Delta took a leap forward both in terms of the number of people who migrated from poverty-to-prosperity, and those rescued from the unemployment market.

“We are committed to sustaining this momentum in the Delta State Medium-Term Development Plan (2020-2023) which has been finalized and should soon be unveiled to the public.

“This second plan encapsulates the strategic imperatives of our Stronger Delta mantra. Our goal remains to grow the economy in a manner that is rapid, inclusive, sustained and Sustainable,” he said.

He congratulated members of the Council and urged them to be guided by the zeal to contribute to the economic growth and development of the state.

Responding on behalf of members of the Council, Commissioner for Finance, Chief Fidelis Tilije, commended the governor for his proactive steps at ensuring that there was security of lives and property in the state, adding that the atmosphere of peace was evident in the state.

He expressed confidence that the Council would “take the right steps to ensure that economic processes and procedures are not just established but seen to be operational and contribute to the equitable development of Delta.”