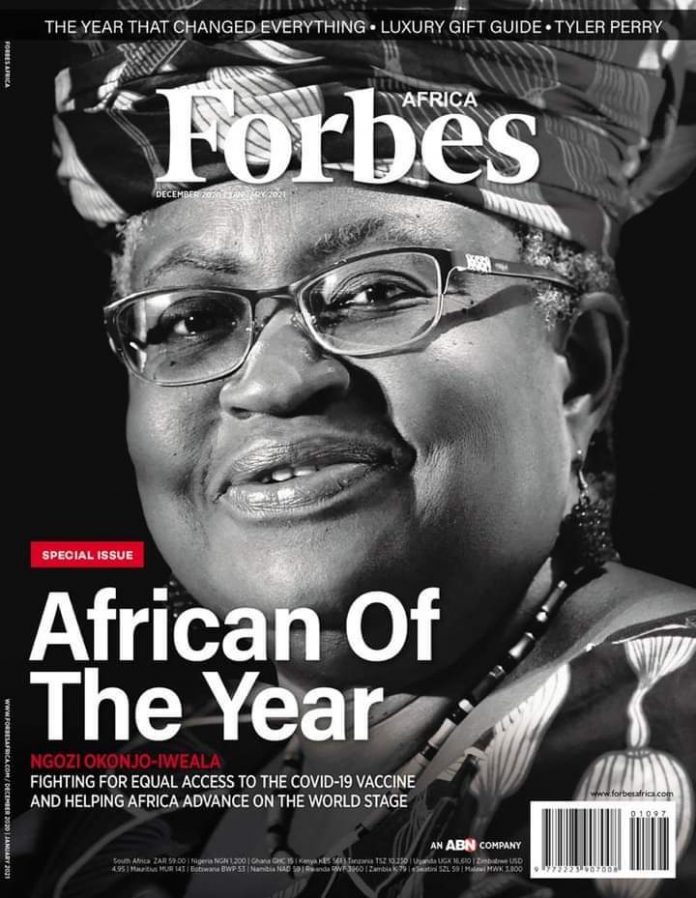 Former Finance Minister and former Managing Director of the World Bank, Dr Ngozi Okonjo-Iweala, has been announced as the recipient of the 2020 African of the Year award.
In a statement, Media Adviser to Dr Ngozi Okonjo-Iweala, Paul C. Nwabuikwu said the award was coming weeks after the Chair of the General Council of the World Trade Organization, Dr David Walker and facilitators of the process for the appointment of Directors-General formally submitted her name as the WTO DG designate – the candidate who has garnered the most support to head the organization.
It will be recalled that Dr Okonjo-Iweala emerged the overwhelming choice of WTO member-countries following a keenly-contested race in which she got the majority support of the 164 member countries.
The Forbes Africa-CNBC award is the latest honour clinched by the multi award winning development economist, one of the African Union (AU) Special Envoys appointed to mobilize international support for Africa’s efforts to address the COVID-19 economic fallout.
She is also the World Health Organisation (WHO) Special Envoy for the newly-inaugurated Access to COVID-19 Tools (ACT) accelerator and its offshoot the COVAX facility, an international collaboration aimed at accelerating the development, production, and equitable distribution of COVID-19 vaccines, drugs and tests kits around the world with the specific objective of ensuring timely, affordable and equitable access to poor countries.
Okonjo-Iweala also serves as the Chair of the Board of Gavi, the Vaccine Alliance, a public-private global health partnership that has immunised 760 million children in developing countries and saved 13 million lives.
Reacting to the news, Okonjo-Iweala, who is known for her humility and humanity, expressed her delight at the recognition and dedicated the award to Africans facing the health and socio-economic challenges of COVID-19 during a very difficult year.
“It is a great honour to serve Africa in different capacities” said Okonjo-Iweala, adding “I look forward to deploying my energies at the WTO for Africa and the world.”
Please follow and like us:

US govt reconsiders ban on visas for Nigerians

Governor Sanwo-Olu announces date for reopening of school in Lagos