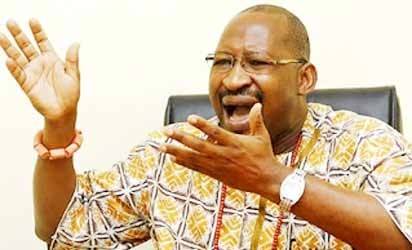 The Vice-Chairman of the National Campaign Council on Communications and Publicity for the Edo Governorship elections, Hon. Patrick Obahiagbon, on Wednesday, condemned the abandonment of governance by Governor Godwin Obaseki.

Obahiagbon, at a press conference, said even though the curtains would finally be drawn on Governor Obaseki’s lackluster four-year term in a matter of months, the incumbent owed it to tge people to deal with the burning issues of flood (as warned by NEMA), insecurity, and other matters of governance, including ways to safely return the children to school – especially those in their penultimate year of study and arrest declining economic growth.

He further stated that it was sad that the governor had continued with charged comments directly calling for violence even as he refused “to increase the paltry 5 million naira he hands to the Police monthly out of the over 700 million naira he withdraws as security vote.”

Obahiagbon  said the governor’s incessant meetings with his party leadership to plot how to subvert the election and undermine the will of the people should be replaced with meetings with seasoned professionals and policy advisors on how to hold the state together before he was finally excused out of office permanently by the people in the coming weeks.

Below is the full text of Obahiagbon’s press statement read at the press confab:

RE: GOVERNANCE ON PERMANENT VACATION IN EDO STATE; WHERE IS GOVERNOR OBASEKI?

Good morning gentlemen and ladies of the third realm.The outgoing Governor of Edo State, Mr. Godwin Obaseki, in between his swashbuckling threats to APC members and placating the members of his divided party, the PDP, who have since turned him into an an ATM machine in a smash and grab stratagem before the curtains are finally drawn on his lack luster four-year tenure, has completely forgotten one important fact: that he remains the Governor of Edo State, even if for a few more months more and that from that point of view, the suspension of the governance and leadership of any State is inexcusable and unacceptable not even for electoral purposes.

As it is today, Edo State is on auto-pilot.

Matters of governance in Edo state which was the primary ratiocination why the Governor was elected, which in any case have been hereinbefore handled with Olympian aloofness and magisterial pontifications, have now been completely abandoned, jettisoned, and forgotten completely as the outgoing Governor has turned his attention, full-time, on how to subvert the September 19th election through rigging, intimidation, arm-twisting, unbriddled threats, violence, and other anti democratic underhand tactics.

As the prime and nonpareil courier of news, you need no reminding that what we are now regaled with from Osadebey Avenue,the seat of edo state government, which in the meantime, houses Mr. Godwin Obaseki, are reports of conflicts over the illegal sharing of State resources, turbo charged comments encouraging the youths to embrace violence, and mass resignations which have bespattered the government and reduced governance to a macossa dance and an alawada cabaret show.

While Mr. Godwin Obaseki continues to huff and puff, promote and nudge Edo youths onto the path of violence with a contrived megalomania meant to hide his crippling fear of what awaits him at the polls on the 19th of September, governance in edo state has been abandoned and edo state citizens are bearing the brunt of this governance nosedive and abandonment.

Yet, this tragedy and failure of leadership playing out before us all is coming at a time the State, and indeed the globe, is experiencing the greatest challenge in a lifetime.

A few weeks ago, the National Emergency Management Agency (NEMA) issued a warning to the Edo State Government to begin an immediate initiation of proactive measures because Edo State was among the highly probable flood-risk states based on the predictions of Nigerian Meteorological Agency (NIMET) and the Nigeria Hydrological Services Agency (NIHSA).

To bring this to the awareness of the outgoing government and force action, we responsibly and timeously delivered a press conference, raising alarm on the importance of heeding the warnings of NEMA and commencing immediate steps into protecting the lives and properties of our people in the identified, flood-prone areas.

Unfortunately and lugubriously so, the rain fast approaches and the Edo State Government has done nothing. The sprinkles we have seen since the warning have already shown signs of a looming calamity. Yet, instead of committing funds to the relocation of our people in these areas, where the waters are already dangerously gathering, Mr. Godwin Obaseki has rather chosen to continue sharing edo states money to “tax collectors”, whilst governance has been completely abandoned and now running on autopilot. We insist and request the good people of edo state to bring it to the attention of the governor that politics of electioneering must not be prioritised over and above the lives of edo state citizens.

Weeks ago, BLUEPRINT media organization, in its online website, published a report with the title ‘INSECURITY: EDO’S WORRISOME HARVEST OF MURDERS’ where it chronicled and offered a glimpse into the murderous crimes on the rise in Edo State.

Even though we have repeatedly raised alarm on the level of insecurity in Edo state,the state government have only continued to pay lip service to security issues. We have said it for the umpteenth time that it is morally unconscionable and represents a security black spot for the outgoing Governor to cart away over 700 million naira as security votes and allocate to the Police a paltry monthly payment of five million naira. Our pleas of an immediate increase and back payments have not been heeded to. WE CALL ON GOVERNOR OBASEKI TO FORTHWITH INCREASE THE MONTHLY SECURITY ALLOCATION OF THE POLICE FROM A PALTERY FIVE MILLION NAIRA TO SOMETHING MORE REASONABLE.

As other state governments continue to hold marathons of meetings with professionals and seasoned policymakers to align with the Federal Government and chart a way out of the negative consequences of COVID-19 and its necessary restrictions on the economy, education, and other aspects of life, the Edo State Government is instead obsessed with holding of night meetings on ways and strategies to limit electoral franchise in the State, harass,assault,dispossess and maim the opposition with a view to rigging its way to an ever-elusive victory.

No one knows the government’s plan for economic recovery and how it intends to return our children safely to school, especially those in their penultimate year of study.

Let us remind Mr Governor that the college of education, lguoriakhi,still remains closed with staffs sacked.

Let us remind Mr Governor that Tayo Akpata University of education, Ekiadolor still remains locked up with staffs and students idling away.

Let us remind Mr Governor that the Benin technical college whose budget is about ten million naira per class room is still yet to be completed even though this project is UBEC funded with the federal government already paying its sixty percent counterpart contribution.

Let us remind Mr Governor that the gelegele seaport remains a mirage notwithstanding the millions of dollars it has gobbled in consultancy and m.o.u’s.

Let us remind Mr Governor that the industrial park has been overtaken by weeds.

Let us remind Mr Governor that there’s still yet no modular refinery as promised.

Let us remind Mr Governor that edo people are still yet to see the promised 200,000,000 jobs per year of our youths.

Let us remind Mr Governor that the Edo specialist hospital which was built and equipped by edo taxpayers money was given to a non-edo indigene to manage and that the fees been charged are way beyond the reach of the average Edo person.

Let us remind Mr Governor that the stadium he promised to build per senatorial district has still not commenced.

Let us remind Mr Governor that he has abandoned the Benin water master storm project which is the Aladdin’s lamp out of our ecological quagmire.

Am sure Mr Governor can now understand why the majority of edo people have stigmatized your belated political manifesto of Make Edo Great Again to meaning Make Edo Grounded Again?

I thank you all for listening!!

Easter Message: CAN president rejoices with Christians, says “all shall be...