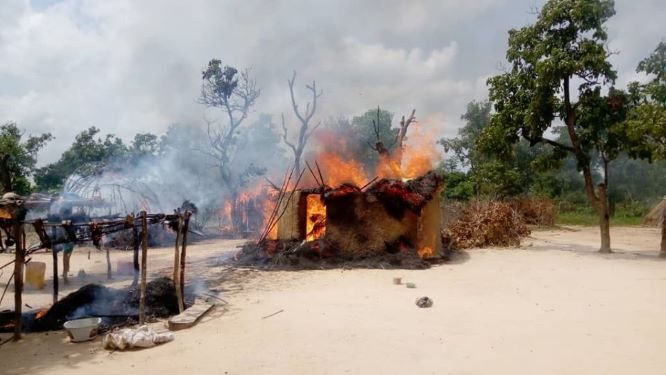 He said troops in aggressive tactical maneuvers stormed the hideout and engaged the bandits who fled in disarray with gunshot wounds.

Enenche further stated that the troops pursued the bandits and made further contact with them, overwhelming them with heavy volume of fire. He explained that one AK47 rifle and one SMG rifle were recovered from area.

The Coordinator Defence Media Operations stated that several bandits suffered heavy injuries and most likely died, as evident in the vast pools of blood along their withdrawal route.

He said the troops also made contact with bandits at Bawan Daji village and neutralized one bandit while many others were fatally wounded.

He said the bandits fled on sighting troops from afar but were pursued by the determined troops who engaged them with aggressive firing.

He said the troops destroyed 7 major bandit camps while one AK47 rifle, and 2 Motorcycles, amongst others were equally recovered.

The Coordinator Defence Media said the also troops stormed an identified bandits camp at Salihawa village in Batsari LGA of Katsina state following credible intelligence on their activities in the village.

He said the troops overwhelmed the bandits with superior firepower and neutralized one of the criminals while several others escaped with fatal gunshot wounds.

He said the suspect was arrested while attempting to convey 13 jerry-cans and 30 litres of Premium Motor Spirit concealed in an ash-coloured Volkswagen wagon car, to suspected bandits.

He further stated that the troops conducted a Cordon and Search operation within Bawar-Daji village. “During the operation, troops neutralized one bandit and recovered one AK 47 rifle, 5 rounds of 7.62 mm special ammunition and one magazine, amongst others” Enenche said.

The military also confirmed that 3 notable bandits have surrendered to troops along with their weapons. “The repentant bandits submitted one Light Machine Gun and 2 X AK 47 rifles,” Enenche said.

He said the Military High Command commends troops of Operation HADARIN DAJI for their dedication, dexterity and professionalism in the conduct of ongoing operations and urges them to intensify operations against the bandits and all other criminal elements threatening the peace and security of the country.

Will Cristiano Ronaldo’s Juventus qualify for the Champions League?

Ministry, NAPTIP to collaborate on fight against trafficking, prostitution