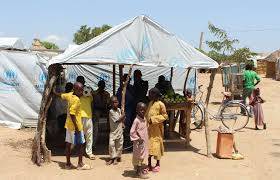 By Bode Olushegun
Nigerian team has visited Diffa, Niger Republic to finalize strategies for the return of refugees to the country.
Thousands of refugees in the wake of Boko Haram crisis have fled Borno State to Diffa in Niger Republic.
A team from Nigeria led by the Borno State Governor, Professor Babagana Zulum, was in Diffa to engage the Nigerien government on quick and dignified return of the refugees to their homeland.
In the team were the federal commissioner in charge of National Commission for Refugees, Migrants and Internally Displaced Persons, Senator Basheer Mohammed and the acting permanent secretary, federal ministry of humanitarian affairs, disaster management and social development, Alhaji Ali Grema.
A statement by the Borno State Governor’s spokesperson, Mallam Isa Gusau, said the governor who was in Abuja for a series of development activities, flew to Diffa on Friday in the company of the federal government officials.
The statement said in Diffa, the governor and the federal team visited Nigerians taking refuge in Niger republic to assess their welfare and to follow up discussions with stakeholders on how to fast-track the safe and dignified return of the
refugees in Diffa for resettlement in Borno.
Zulum, Mohammed and Grema were said to have held meeting with the Governor of Diffa province, Alh. Isa Lameen, where they expressed gratitude to Nigerien Government and host community members for their empathy and support for Nigerian refugees in camps in the province.
The statement said from Diffa province, same Friday, Governor Zulum and the federal team flew by chopper to Damasak, headquarters of Mobbar local government area of Borno State where they interacted with batches of former refugees who returned from Niger Republic.
They also inspected temporary shelters newly built to accommodate over 1000 households.
The statement further said while in Damasak, Zulum was at the 29 Task Force Brigade of the Nigerian Army, where he assured the military of his government’s support for soldiers and pledged his commitment to peace building efforts.
The governor was on Sunday in Banki, a commercial border town in Bama local government area with Cameroon where he distributed N80 million cash to displaced families as livelihood support.
The households had faced challenges of not having enough money to buy food from vendors around them.
The Banki camp hosts about 42,000 IDPs mainly from Banki, Kumshe and other surrounding communities.
The statement said the governor gave each beneficiary N5,000 to procure food items.
The governor also sympathized with the displaced families over their plight, he assured that government will devise means of ensuring food sufficiency and make Banki -Bama road motorable .
Please follow and like us:

Why COVID-19 Less Deadly In Africa, By John Campbell