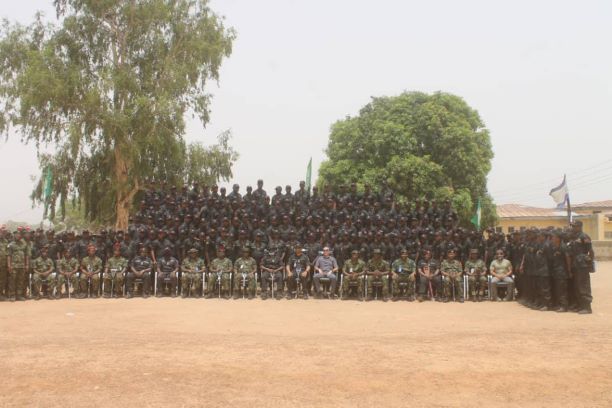 According to Acting Director Army Public Relations Col. Sagir Musa, the Graduands are officers and soldiers of 81 Battalion, 198 and 199 Special Forces’ Battalions.

Musa said Lt Gen Lamidi Adeosun who is the Chief of Policy and Plans, ‘Army’ represented the Chief of Army Staff Lt Gen TY Buratai at the occasion.

He said Gen Adeosun commended the graduands for their hardwork, Discipline and for putting in their best during the course. “He also commended the tactical simulation conducted as part of the high points of the ceremony by the Special Forces,” Musa said.

The Army spokesman added that Gen Adeosun urged the graduands to put their newly acquired special skills to use in meeting the operational objectives of Nigerian Army and the Country at large.

Gen Adeosun also stated that Nigerians are appreciative of the troops’ sacrifices and urged them to be prepared to give their best all the time.

He used the opportunity to commend the Nigerian Army School of Infantry (NASI) and SPIS Ltd for successfully completing the training of the first batch of the trainees.

He urged the graduands to make a difference in the Theatre of Operation as the School of Infantry would monitor their performances in the field through the Nigerian Army feedback monitoring system.

Presidency says those calling for secession are Nigeria’s greatest problem

THE INTRIGUING ORAL HISTORY OF ISINKAN PEOPLE FROM CREATION AND ISINKAN’S...

Army on red alert in Abuja over reports of planned siege...

Plenary proceedings of the House of Representatives for Wednesday, October 13th,...