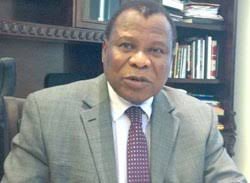 “There are ambassadors who are here years, and pass on, and no one notices that they were ever here, that certainly wasn’t the case with Amb. Adefuye – J.Peter Pham, director of the Africa Center at the Atlantic Council, Washington, DC.

Demographically and by the size of her economy, Nigeria leads the rest of Africa. Nigeria’s estimated population is more than 190 million and this is expected to grow to 400 million and make her the third most populous country in the world after China and India by 2050.

It would be recalled that the US established diplomatic relations with Nigeria in 1960, following the country’s independence from the UK. The US is arguably the largest foreign investor in Nigeria, with her Foreign Direct Investment (FDI) concentrated largely in the petroleum/mining and wholesale trade sectors.

Beyond the strategic sectors’ volatilities, at $2.2 billion in 2017, Nigeria is the second largest U.S. export destination in Sub-Saharan Africa. Both have a bilateral trade and investment framework agreement. In 2017, the two-way trade in goods between the two nations totaled over $9 billion.

Nigeria is eligible for preferential trade benefits under the African Growth and Opportunity Act (AGOA). Both belong to a number of the same international organizations, including the United Nations, International Monetary Fund, World Bank, and World Trade Organization. Nigeria also is an observer to the Organization of American States.

It is against this background, as well as recalling the exit of diplomat par excellence, Ambassador (Prof.) Adebowale Adefuye, Nigeria’s top-notch former US ambassador who died on August 27, 2015, that a fair deconstruction of the plummeting bilateral Nigeria-US relations can best be attempted.

The critical and strategic importance of the bilateral diplomatic and economic relations between these continental giants in the global big picture makes it imperative that Nigeria gets right the personality given the responsibility to adroitly manage the two-nation interface and intercourse. And this necessarily recalls and significantly centralizes the groundbreaking contributions of the late Ambassador Adefuye. This is even more so because five years after Adefuye’s death, Nigeria’s diplomacy with the US is still suffering in Washington.

Before his death, he had just completed his tour of duty to the US as the nation’s ambassador, having been recalled alongside other envoys, by President Muhammadu Buhari. Feelers then were that President Buhari was going to reappoint him or offer him another assignment. Before he was asked to step down, Ambassador Adefuye had organized Muhammadu Buhari’s first official visit to the US as president.

He was appointed Nigeria’s Ambassador to the United States in 2010 by President Umaru Yar’Adua, following the recall of General Oluwole Rotimi over differences with the Minister of Foreign Affairs, Ojo Maduekwe, and the very controversial rejection of Prof. Tunde Adeniran as ambassador-designate to the US.   Before then, Adefuye was Nigeria’s High Commissioner to Jamaica, with concurrent accreditation to Belize and Haiti (1987 – 1991), Deputy High Commissioner at the Nigerian High Commission in London (1991 – 1994), Deputy Director of Strategic Planning at the Commonwealth Office, UK (1994 -2008) and Special Advisor with the Economic Community of West African States – (ECOWAS), (2008-2010).

Adefuye’s brilliant skills and prior accomplishments leveraged him in his role as Nigeria’s Ambassador to the US. He was Ambassador to the US at a period of trying, often frosty and contradictory relationship between Nigeria and Washington. It was his job to promote better relations between Nigeria and the US, to look after the interests of Nigerians in the US and to defend Nigeria.

More, he faced severe financial stress also as the embassy lacked necessary funds for consular activities. At some point the embassy needed about $700,000 monthly to pay bills, salaries of local staff members and diplomats, medical insurance, vehicle insurance, security, cleaners and others.  Sometimes two, three months, Abuja would not send money and when they did it fell short of what was needed.

Despite all these problems, he was still the ambassador par excellence in Washington. He coordinated the African Ambassadors Forum in Washington with meetings always being held at the International Drive facility of the embassy of Nigeria. He did not allow the challenges to affect his duty; he defended Nigeria with passion.

He was always at the State Department, making a case for Nigeria.   He was mad at the late U.S ranking senator, John McCain, for referring to the then president of Nigeria as “some guy named Goodluck Jonathan.”   The late ambassador in his response said “the ranking Arizona Senator and former Republican presidential candidate has inexplicably seized on the pain of a distressed nation not only to show contempt to our country but also denigrate the office and person of His Excellency, Dr Goodluck Jonathan, President of the Federal Republic of Nigeria.”

“One wonders what could have happened if the 2008 elections have gone the other way and McCain became the President of the most powerful nation in the world,” Adefuye continued. “The good Lord has a better plan for the people of the world.”

When Barack Obama emerged as the 44th US President in 2009, many African diplomats perhaps had imagined his tenure would incept a new era of golden relationship between Africa and the US. President Obama’s African roots never brought this expectation to fruition.

The Nigeria-US relation under President Obama was uneasy and lukewarm for unclear reasons. A year before Adefuye was posted to the US, in 2009, the underwear bomber incident had occurred involving a 23-year old Nigerian, Umar Farouk Abdulmutallab, now in jail in the US.  Abdumutallab confessed to working with the Al-Qaeda to detonate plastic explosives hidden in his underwear while on a Northwest Airlines flight to the US on Christmas Day, 2009.

That was a very bad moment for Nigeria as she was perceived in the US as a potential terrorist and watering hole for terrorists. Not surprisingly, Nigeria was placed on the US terrorism watch list.

By the time Adefuye arrived as Ambassador, the situation had worsened with the escalation of Boko Haram insurgency. Then, there was the tragic bomb attack on the UN building in Abuja, in August 2011, resulting in the death of 21 persons – rightly outraging the international community. In November 2013, the US designated Boko Haram a Foreign Terrorist Organization.

In the face of all these extreme challenges, Adefuye spoke up for Nigeria. He understood the implications of Nigeria being branded an outpost of ISIS or Al-Qaeda: implications for investments in Nigeria, and the national brand and identity. His sheer persistent patriotism leveraged his image and he became very well known in the US State Department and across policy and diplomatic circles in Washington DC.

Adefuye set up President Goodluck Jonathan’s first and subsequent meetings with President Obama and was instrumental to the re-energization of the US-Nigeria Bilateral Commission.     A tireless Adefuye penned newspaper articles to defend Nigeria and published a newsletter to boot.

Notwithstanding the issues with the Obama administration, Ambassador Adefuye managed to win over Secretary of State Hillary Clinton, who willy-nilly became a good friend of Nigeria. Adefuye obtained a Ph.D from the University of Ibadan in 1973, and was later a Fulbright scholar in the United States at Columbia University, the University of North Florida, and the University of Florida.

He later taught history at the University of Lagos, Nigeria, eventually becoming a Professor of History and Head of Department of History (1985 -1987). He made his mark as a scholar as well. Five years after his demise, the audacious diplomatic engagement template he cobbled still stands as a compass to guide Nigeria’s choice of appointment of a future ambassador(s) to manage the uncommonly strategic Nigeria-US economic and diplomatic relations.

The plaudits he has garnered over four decades of professional and diplomatic trajectories remain indelible for obvious reasons. And what’s more, great lives are indeed deathless.

▪︎Soneye is the publisher of Per Second News.

NHRC, NAPTIP and Police partner against rape and gender based violence