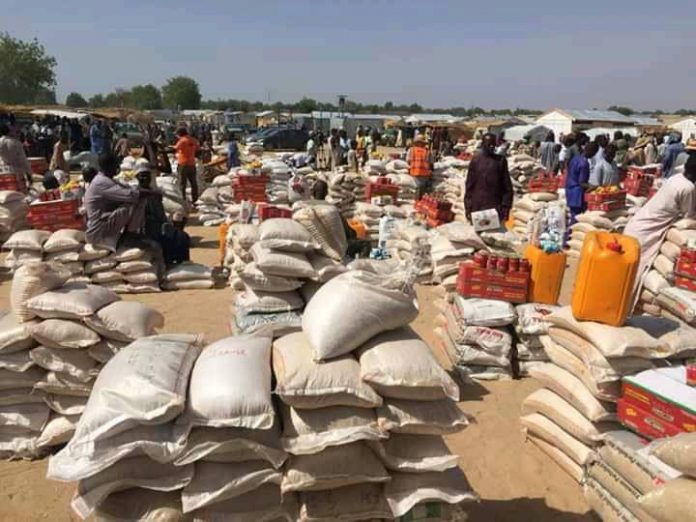 Internally Displaced Persons (IDPs) in troubled Borno are to celebrate the Yuletide with food on their tables as the National Emergency Management Authority (NEMA) has commenced the distribution of December food rations to over 38,000 households.

Officials of the agency have been moving round IDP camps in Maiduguri and environs since Monday distributing food items to victims of Boko Haram insurgency.

A statement on Thursday by the information officer of the agency in its Northeast zonal office in Maiduguri, Abdulkadir Ibrahim, said: “In continuation of the efforts to provide succour to Internally Displaced Persons especially during the Yuletide, Director General of NEMA, Air Vice Marshal Muhammadu Muhammed (retd) has approved the monthly distribution of food items to IDPs in Borno state for the month of December.”

Ibrahim said NEMA officials led by Umar Sani, Head of Borno state food distribution team had since commenced the distribution of food items at the camps.

He pointed out that the distribution would be concluded before Christmas to allow all IDPs have a merry celebration.

Ibrahim noted that NEMA under the supervision of Hajia Sadiya Umar-Farouk, Minister of Humanitarian Affairs, Disaster Management and Social Development, had been poviding monthly food rations and condiments to 38,000 households of Internally Displaced Persons in camps, host communities and liberated communities in Borno state.

Speaking on behalf of the IDPs at Farm Centre IDP camp in Maiduguri, the camp IDP Chairman, Mallam Massa Lamisuye expressed their sincere appreciation to the Federal Government and the DG of NEMA for the timely monthly food assistance they have been receiving since his assumption of office.

2023: PDP says INEC has no excuses on electronic transmission of...

NIGERIA AT 60: A CALL TO HOPE, By Bishop Matthew Hassan...