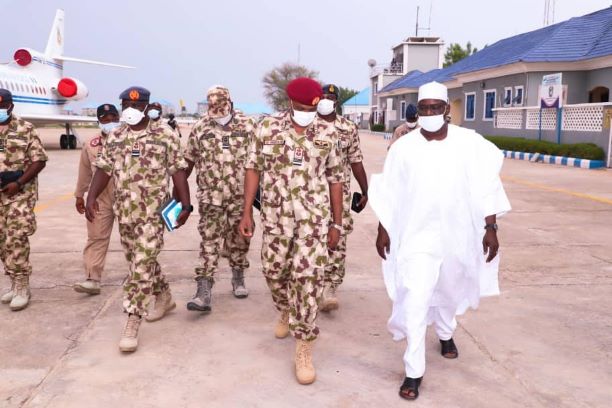 Senator Mohammed Ali Ndume representing Borno South has commended the Nigerian Air Force’s (NAF’s) efforts at launching massive air campaigns that have further degraded the capacity of the insurgents in North East, while also sustaining the onslaught against bandits in the North West of the Country

According to Director of Public Relations and Information Nigerian Air Force, Air Commodore Ibikunle Daramola, the Senator was at the Headquarters, Air Task Force (HQ ATF), Operation LAFIYA DOLE in Maiduguri on Friday to identify with the NAF on the successes recorded in recent subsidiary air interdiction operations, targeting terrorists’ locations in the North East,

Daramola confirmed that the Chief of the Air Staff (CAS), Air Marshal Sadique Abubakar, played host to the Senator.

He said the Senator was conducted on a tour of some operational facilities at the HQ ATF.

Also with the CAS, who has been in Maiduguri to oversee the conduct of Operation LONG REACH II, are the Chief of Training and Operations, Air Vice Marshal (AVM) James Gwani; Chief of Aircraft Engineering, AVM Musibau Olatunji; Chief of Logistics, AVM Mohammed Yakubu as well as Directors from HQ NAF.

2023: Nigerians will no longer tolerate failures or excuses -Prof Jerry...