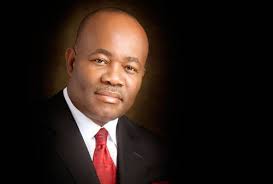 Minister of Niger Delta Affairs, Senator Godswill Akpabio at the ongoing probe of alleged contract scam in the Niger Delta Development Commission (NDDC) has said the biggest beneficiaries of contracts are lawmakers.

TheNewsGuru.com (TNG) reports Akpabio said 60% of NDDC contracts were awarded to members of the National Assembly.

“We all know that most of the contracts at NDDC are given to members of the national assembly,” he said.

He was then interrupted by the members of the committee who asked him to give clarifications on other issues.
Please follow and like us:

PDP asks Emefiele to resign over poor state of economy

PDP blames “political bandits” in APC for failure in governance

Blackout in Lagos, Abuja, Enugu, others as national grid collapses

Lalong will complete N29bn legacy projects before May 2023, says Commissioner