The National Assembly has injected N1 billion into the revised 2020 Budget for the review of the the 1999 Constitution.

This was contained in a list of the proposals of spending by the National Assembly in the 2020 Budget.

The N1 billion earmarked for the review of the 1999 Constitution in the 2020 Budget is separate from the N128 billion budget of the National Assembly for the year.

The proposal to spend N1 billion on the review of the Constitution is under the Service Wide votes of the revised 2020 Budget as passed by the National Assembly.

In the past Assembly, the money for the review of the Constitution is always in the National Assembly budget.

But the revised budget as passed by the lawmakers showed that it was a single line item in the National budget.

It is also separate from the N9.25 billion provision for the renovation of the National Assembly Complex packaged in the budget of the Federal Capital Territory.

Many lawmakers had complained that none of them knows the details of the N128 billion budget of the National Assembly.

It could be recalled that in February 2020, Lawan inaugurated a 56-man Constitution Review Committee headed by the Deputy Senate President, Senator Ovie Omo-Agege. 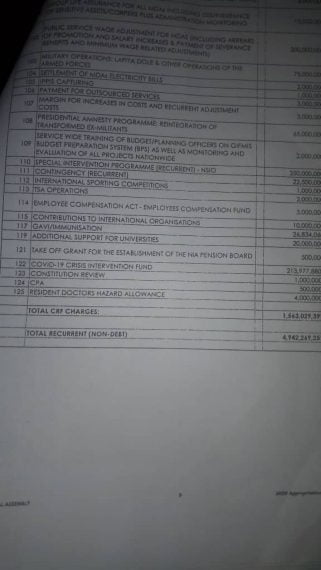 Kamala Harris to be first woman to hold US presidential power...

Plenary proceedings of the House of Representatives for Thursday, December 16th,...

Plenary proceedings of the House of Representatives for Thursday, July 2,...

Killing of 81 in Borno is worrisome, UN condemns attack