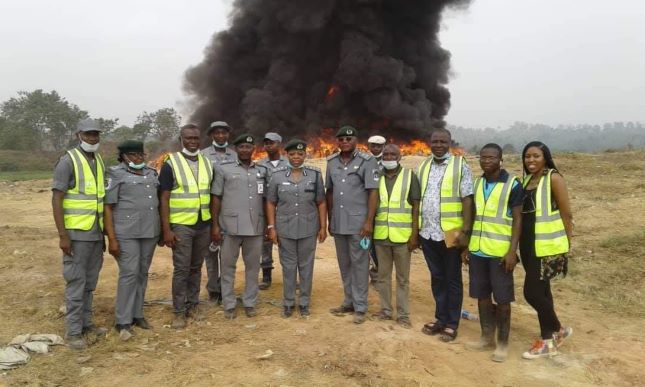 National   Agency   for   Food   Drug Administration and Control (NAFDAC) and Nigeria Customs  Service have destroyed tramadol and other prohibited/fake drugs worth N14.7b at Oke-diya dumpsite in Sagamu, OgunState

Speaking at the event, Chairman of the joint committee, Victor Dimka, told journalists that smugglers would continue to suffer huge economic losses if they continued with such importations.

Dimka, who is Comptroller of Enforcement at Customs Headquarters, described the   seizures   made   in   different   parts   of   the   country   as   proofs   of uncompromising commitment to enforcement by Customs and NAFDAC officials.

He reiterated the charge by Comptroller General of Customs, Col. Hameed Ali, to all officers of the service to shun compromise and strictly enforce the law on anti-smuggling.

Dimka also commended the level of cooperation customs was receiving from NAFDAC,  Nigerian   Army   and   other   government  organisations describing it  as   a  good   example   of inter-agency  cooperation  between sister government outfits.

“This destruction is in continuation of the exercise we started 24th  July 2019 involving 58 containers of illicit drugs seized by our men. After the Lagos exercise we shall be going to Porthartcourt and Kaduna to continue with the destruction,p” he said.

The Comptroller General of Customs who was represented by ACG Zone A, Mrs Katharine Ekekezie, blamed importers of the drugs for several drugs-induced sicknesses like cancer, renal failure and heart failure.

She urged Nigerians to distance themselves from the drugs that were capable of destroying lives and endanger the country while advising importers to bring in things permitted by law.

The representative of the Director General of NAFDAC, Pharmacists Joseph Asikpo  described   some   of   the   seized   drugs   as medicines produced in contravention of approved dosages .

He   narrated   their   adverse   effects  on  consumers   to   include   contracted pupils, extreme  drowsiness,  slowed  breathing,  slowed  heartbeat,  weak muscles and  loss of consciousness which could lead to death.

Asikpor added that they could also cause neurological toxicity, respiratory failure and cardiac disturbance.

UN calls for decongestion of IDPs camps to check against COVID-19,...