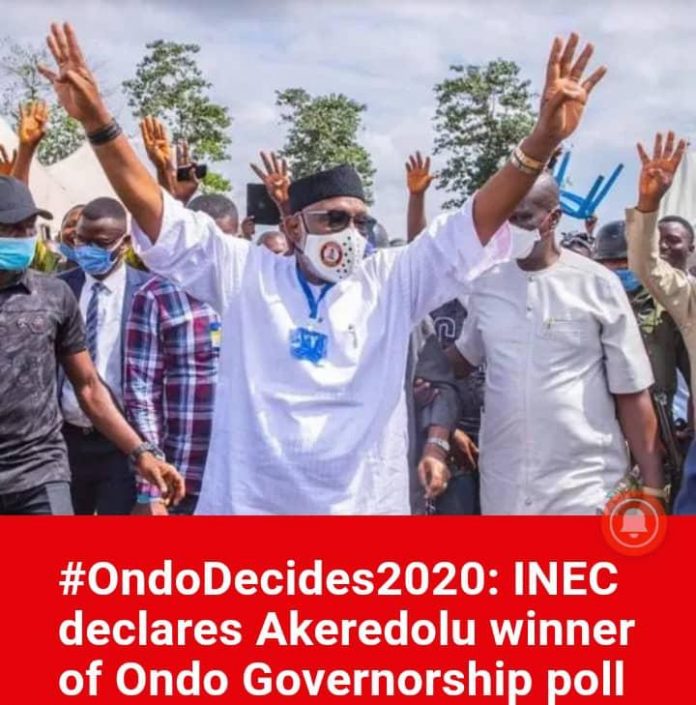 Governor Oluwarotimi Akeredolu (SAN) of Ondo State on Sunday described his reelection as the reward for hard work, dedication, focus, honesty and patriotism.

Akeredolu stated in Akure shortly after the Independent National Electoral Commission (INEC) declared him winner of the election which he won by a margin of 97,039 votes.

Akeredolu said his reelection was an indication of his administration’s performance in the last three and half years.

The governor also said the outcome of the election was an eloquent testimony of his  acceptance by the people of Ondo State.
“It affirms that the confidence reposed in our administration remains unshaken.It is also a challenge to us for rededication to service in the interest of our people. On this, we shall not relent.
“We set out on the first leg of this political adventure with the determination to make the whole state our constituency.
“We have not relented on our mission to bridge the huge infrastructural deficit inherited on assumption of office.
“We hold the axiom as evident that the welfare of the people should be the only justification for the existence of government.
“We have allowed this admonition to be the guiding principle of governance. We are elated to receive a scorecard through this state-wide plebiscite,” he said.
The governor also said the few dissenting voices of protest were heard loud and clear, while all genuine grievances would be addressed.
He reaffirmed his commitment to continue to focus on the development of the state, with the people at the centre of all decisions.
“We will proceed with our administrative style of ensuring  transparency and accountability.
“We are determined to set our state, progressively, on the path of real development. Self-reliance is attainable. Our state has no business with poverty.
“Sincere, purposeful and focused leadership should have little difficulty in harnessing the vast resources, both human and natural. We will put in everything to justify the trust reposed in us,” he said.