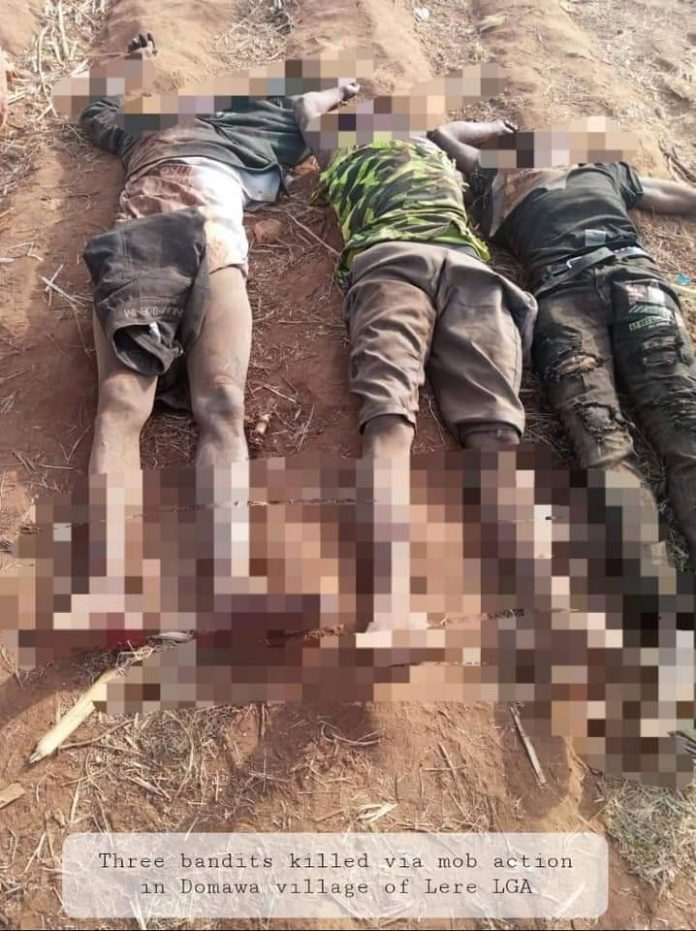 Security agencies have reported to the Kaduna State Government the killing of six bandits by mobs in Sanga and Lere local government areas.

According to the operational feedback, on 24th December 2020 at Fadan Karshi in Sanga local government area, two bandits attacked a businessman and dispossessed him of money and other valuables.

Commissioner, Ministry of Internal Security and Home Affairs, Samuel Aruwan said on receiving the distress call, the military and police set out to the location.

However, on getting to the scene, some angry locals had already mobbed the bandits and burnt them beyond recognition.

He said the bullets hit one Richard Sabo who in the course of driving knocked down one of the bandits to death.

In Lere local government, security agencies reported that some bandits from a neighboring state who specialized in stealing livestock were also killed through mob action.

According to the report, the bandits were chased and overpowered at Domawa village where three of them met their end in the hands of the mob.

Aruwan said the government was in receipt of a report of the killing of a commercial motorcyclist, one Hudu Yahaya of Ungwan Nungu village of Sanga local government.

He was beheaded by bandits who escaped with his motorcycle.

He said Governor Nasir el-Rufai had sent condolences to the families of Richard Sabo and Hudu Yahaya and prayed for the repose of their souls.

Aruwan said the Governor had also made a strong appeal to citizens to continue to have recourse to the law and not resort to jungle justice.

Elon Musk falls to second richest person in the world after...

Osinbajo off to Oslo for Nordic-African Business Summit