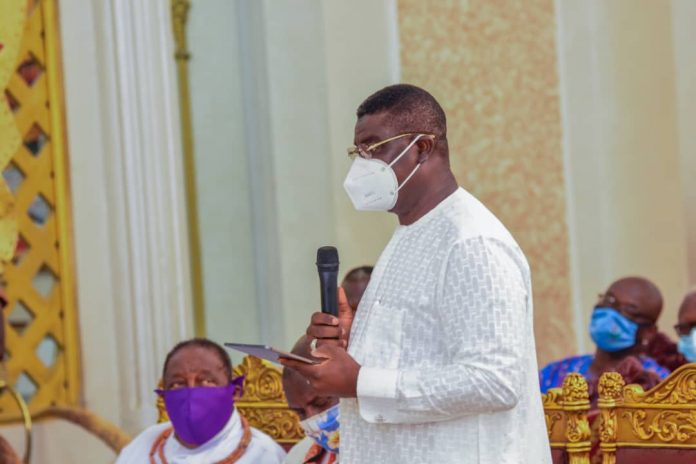 Minister of State for Budget and National Planning, Prince Clem Ikanade Agba, has reeled out the achievements of President Muhammadu Buhari’s administration in the road and transport sectors in Edo State.

He said that in looking to improve access to farmland and industries as well as transportation, the federal government had done some work in the railway sector from which Edo State benefitted.

According to him, “We completed and inaugurated the abandoned Itakpe-Ajaokuta-Warri rail line.  This line, which passes through Itogobo, Agenebode, Uromi, Ekehen and Igbanke and links to the Warri Port, will significantly open up the state to investments and assist our communities in all the senatorial zones with their trade.”

Agba stated this in his prepared remarks for his ministerial engagements with a wide range of stakeholders in Edo State, which events were botched by the State Government.

But he spoke extensively to the prepared remarks when he started out on Wednesday with a visit to the Oba of Benin, Ewuare II.

Agba also spoke in a similar vein when he visited the Onogie of Iviukhua Community in Edo North Senatorial District on Friday.

He said that the Lagos-Calabar Rail, which would pass through Benin City, had also been approved, adding that “this second line, when completed, will change the face of the state and make it more attractive for business, thereby restoring it to its former glory.”

The minister said that the federal government was rebuilding and expanding the road networks, pointing out that over 1,531 kilometres of roads had been constructed and 1,008 kilometres rehabilitated across the country.

“Priority projectsbsuch as the Abuja-Kaduna-Kano highway as well as the Second Niger Bridge are well underway.  In every state of the federation, there are major federal road projects going on.

“The provision of massive infrastructure and improvement of the enabling business environment are to diversify the economy and provide opportunities for growth and development of other sectors/industries. They help to create an ecosystem more supportive for entrepreneurs.”

The minister also said that the Federal Government had developed an Economic Stimulus Package to prevent a potential deep recession and to accelerate quick recovery of the economy in the event of a recession.

He said this was aimed at retaining and creating jobs, increasing productivity, ensuring social stability and addressing long-standing economic vulnerabilities as envisaged in the Economic Recovery and Growth Plan (ERGP).

According to him, “Thus, in spite of the impact of COVID-19 and dwindling revenue from oil, our strategy is to continue to expand government activities to cushion the effect of the pandemic with a total estimated stimulus package of N2.3 trillion.

“This consists of N500 billion direct budget intervention fund, and the balance are FGN programmes to be financed by special funds through the financial institutions at 5 percent interest rate. The fiscal and monetary policies support States, businesses, households and individuals through grants, tax relief, payroll support, tariff reductions, and direct support to the health sector.

“The federal government is supporting the financial viability of states through the suspension of payments in respect of ISPO and moratorium on deductions in respect of bailout loans.  We have released N46 billion to 36 states and the FCT.”

The minister said that government had taken measures to support the health sector, adding that “we have accelerated the Agriculture for Food and Jobs Plan (AFJP) under which we have trained and deployed over 35,000 N-Power Agro youths to 774 local government areas as enumerators to register farmers tied to their farms and productive assets.”

He disclosed that over 5,000,000 farmers had been registered under the plan while 1,000,000 farms had been cleared in the batch A list sent to the Central Bank of Nigeria (CBN) as beneficiaries of the National Economic Sustainability Programme zero-input financing to smallholder farmers with five acres and below.

The minister also stated that “Jobs for Youth and Women programmes bring together some of the key elements in this plan, including road construction and maintenance, digital economy and education alongside the creation of a national public works programme that involves the employment of 774,000 youths.

“These projects will boost the capacity of women in artisanal employment and it has expanded the Social register from 2.6 million to 3.6 million households.”

The war against Glaucoma, By Jennifer Abo-Briggs

Revealed: Ibadan based company where 30 people tested positive for COVID-19