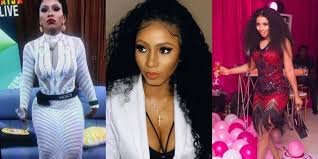 Mercy has beaten stiff competition to emerge as the winner of the Big Brother Naija reality show for season 4.

Host of the show, Ebuka-Obi Uchendu, announced the winner on Sunday evening to wild cheers from excited supporters.

Mercy got forty-one per cent votes while Mike got 19 per cent, making her the first female winner of the competition.

Down from 26 housemates, the keenly contested #PepperDem race saw Mercy, Seyi, Omashola and Frodd reach the finals as they battled for the grand price of 60 million Naira.

It had been an intriguing and eventful 90 days as each housemate served their own dose of ‘pepper’.

From the occasional fights, drama and controversy, to the tasking arena games, Friday night parties, celebrity visits and surprise evictions, the show most definitely served up enough pepper and spice that constantly sparked conversations among Nigerians, especially on social media.

One of the biggest highlights, however, was the shocking eviction of one of the housemates, Natacha Akida, popularly known as Tacha.

The 23-year-old who had been one of the most controversial housemates of the season was disqualified after she and Mercy got involved in a fight.

After having survived back-to-back nominations and even two strikes which had been absolved by biggie, her disqualification sparked various reactions from social media with fans suggesting that Mercy should also have been disqualified.

The prizes Mercy is carting home from BBNaija

As the winner of the Big Brother Naija 2019 grand finale prize, Mercy Eke is going home with prizes worth N60m. However, not everything is cash.

According to the organisers of Big Brother Nigeria reality show, MultiChoice Nigeria, Mercy will collect a cash prize of N30million and an SUV from Innoson Motors.

She has also won a trip to Dubai for two packaged by TravelBeta; a home make-over courtesy Scanfrost; a year’s supply of Pepsi and One Africa Fest VVIP experience; a year’s supply of Indomie Noodles and Munch It; and a brand new Oppo mobile smartphone.

The winner of the previous edition was Miracle Ikechukwu Igbokwe, who got N45m worth of prizes.

Chief Executive Officer, MultiChoice Nigeria, Mr. John Ugbe said: “Each edition of Big Brother Naija significantly improves on all aspects of the previous season and this year is no different”.

The PepperDem season is officially over and the show will definitely be missed by many …until next season/see you in the next season.

Orji Kalu, Joshua Dariye — convicts who may benefit from FG’s...