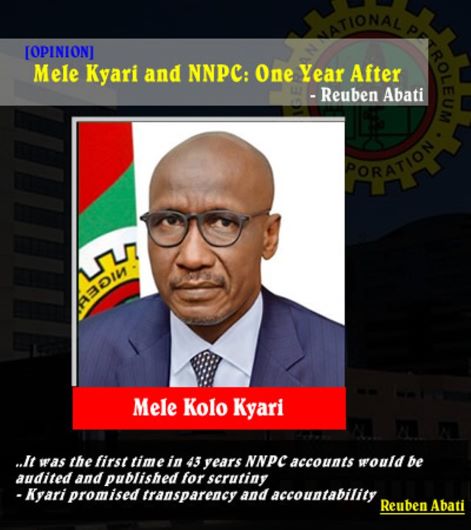 A year ago, Mele Kolo Kyari was named as the Group Managing Director (GMD) of the Nigerian National Petroleum Corporation (NNPC). He succeeded Maikanti Baru, now of blessed memory. On July 8, 2019, the then incoming GMD made the following promises: (i) There will be no corruption without discretion. We will work with all shareholders within the NNPC group to ensure there is no discretion in the system; (ii) We will build this company to enable it to compete with its global peers. We are not saying we will not make mistakes along the way, but we will not make deliberate mistakes. (iii) We will deliver all our four refineries within the life of President Buhari’s administration. We shall seek strategic partnerships to ensure Nigeria becomes a net exporter of petroleum products.” Within two months of settling down in office, Mele Kyari further reiterated the goals of his tenure. One year later, how has he fared? Is the NNPC better today than it was at the point he took over the helms of authority? Has he been faithful to his promises? This is the focus of this brief, preliminary interrogation of his first year in office. I intend to be fair but I will also raise questions.

Mele Kyari’s main achievement in the last year should be the efforts that he has made to create a peaceful environment for team work, efficient communication and collaboration within and outside the NNPC system. His tenure so far has been without rancor, dispute or the kind of unnecessary drama that characterized his predecessor’s time in office. There was no love lost at any time between Dr. Ibe Kachikwu as Minister of State for Petroleum and Maikanti Baru as GMD of the NNPC. I stand to be corrected. Baru succeeded Dr. Kachikwu as GMD and when Kachikwu became Minister of State, both worked largely at cross purposes. Baru reportedly had the support of the Villa and the late Chief of Staff, Abba Kyari. Mele Kyari assumed office in July. In August 2019, President Buhari named Timipre Sylva as Minister of State for Petroleum. Kyari and Minister Sylva seem to have a much better working relationship. Kyari seems to be doing a better job of managing internal politics. He also seems to be doing a good job of managing relationships with stakeholder communities. Within a few weeks of assuming office, for example, he was able to broker peace between Shell/Belema Oil, operators of OML 25 and the oil well’s host community in Akuku Toru Local Government Area of Rivers State. Crude oil production activities in the community have since resumed. Brokering peace with oil bearing communities however is a task that the NNPC should remain focused upon. In the absence of a mutually acceptable framework to address the interest of host communities, and the failure of the National Assembly to enact the Petroleum Industry Bill, the people of the Niger Delta will remain aggrieved, and they are not keeping quiet at all. Kyari and the NNPC need to do more in this regard.

Kyari promised transparency and accountability. One year later, he can claim to have scored big in this regard with the release in June 2020, of the 2018 Audited Financial Statement of the NNPC. The statement covered all the 20 plus subsidiaries in the NNPC group. It was the first time in 43 years NNPC accounts would be audited and published for scrutiny. Before then unaudited monthly financial and operational reports were published but Kyari is the first Group Managing Director to subject the accounts to an independent audit. The Nigeria Extractive Industries Transparency International (NEITI) and other industry watchers who had consistently insisted that NNPC’s opaqueness and inefficiency was unacceptable were understandably pleased that for the first time in four decades, the NNPC is willing to render audited accounts. But, ironically, the published audited accounts exposed the very reason why previous GMDs failed to toe the same line. The revelations are damning, if not surprising. It was disclosed for example that the country’s four refineries have all been running at a loss. The Kaduna Refinery in particular did not earn any income during the period of the audit. In 2018 alone, the Kaduna Refinery recorded zero revenue. Zero! And yet it reported an operating cost of N65 billion. What! In other words, Nigeria spent that amount on that refinery and got nothing in return. How about that as a business model?

This question is important. When he assumed office, Kyari promised to fix the refineries before 2023. In 2015, the All Progressives Congress (APC), Nigeria’s ruling party, promised to fix one refinery per year. Five years later, where are we? The children of the workers in those refineries today, can their own children work there in the future given the present state of the assets? The truth is that government has no capacity anymore to manage those refineries. The thing to do is to release them to the Bureau for Public Enterprises (BPE) for privatization. The point has been well made over the years that if the refineries work and there is efficient local refining of crude, Nigeria would save cost and Nigerians won’t have to pay N143 per litre for petrol!. In a recent report by Stakeholder Democracy Network (SDN), we are told that Nigeria wastes valuable funds importing “low quality” and “dirty” petrol from European refineries whereas it can do much better locally. The report reveals that the bush, illegal, artisanal refineries in the Niger Delta produce even much better fuel. Does this make sense? There is no reason why Nigerians should be placed at the mercy of so-called market realities and made to pay through their nose for a natural resource that is in their own backyard. I have said my bit. But going forward, what is Mele Kyari’s strategy? What does he intend to do?

Mele Kyari promised to increase crude oil production. He has been able to do so. Under his watch as NNPC GMD, in the last year, crude oil production reached about 2.3 million barrels per day at a point. The fortunes of the Nigerian Petroleum Development Corporation (NPDC), the corporation’s flagship upstream company also improved. NNPC also executed the NPDC OML 65 project which should generate more revenue and create jobs in the areas of operation. This however has been affected by the COVID-19 pandemic. With the shut-down of the global supply chain and various industries, oil producers were faced with demand and supply disruptions. In April 2020, OPEC+ agreed to cut global output by a record amount of about 10% of global supply. COVID-19 reduced demand for oil, and drove down oil prices. Storage tanks were full; there were no off-takers. The impact on oil-dependent economies like Nigeria was devastating. Nigeria’s 2020 budget which was benchmarked at $57 per barrel had to be revised more than thrice. Low oil prices meant lower revenue for Nigeria. COVID-19 has exposed the vulnerability and fragility of Nigeria’s mono-cultural economy. It is interesting, however, to see the NNPC actively involved in the on-going conversations about how Nigeria now more than ever, needs to address this challenge.

Further, Mele Kyari as part of his one-year score card can include the Final Investment Decision (FID) on the Train 7 of the Nigeria Liquefied Natural Gas Company (NLNG) which was taken in November 2019. The project has been on the table for years. Kyari led the negotiations to a decision stage. The NLNG is one of the most successful business models in Africa. It is expected to generate over $20 billion revenue and over 50,000 direct and indirect jobs. Nigeria may need to consider the same model for moving the NNPC to a higher level. It is also under Kyari’s watch that the AKK gas pipeline project which had been in the pipeline since the 80s was finally commissioned! Kyari also promised in 2019, to leverage on technology and innovation. Our investigation reveals that the downstream arm of NNPC operations – the buying and selling of petroleum products – is heavily digitized under Kyari, resulting in a significant reduction of human interface and bureaucratic red tape. Marketers can now see inventories across 22 depots and make appropriate decisions based on real-time data. NNPC Retail is also digitized to enhance service delivery. While this is another case of promise made and kept, it is worth noting that many stakeholders and observers are uncomfortable with the NNPC’s seeming “monopoly” of the downstream sector, and rightly so. They insist that the NNPC should operate upstream and leave the downstream sector for private investors.

Between 2002 and now, private investors have invested so much in the importation of finished products and the building of tank farms and fuel stations. Their expectation was that government was serious about its decision to deregulate the downstream sector. But today, deregulation is essentially a myth. Shortly after the deregulation plan, the NNPC took over the downstream sector. It began to build petrol stations, and established a retail company. Private sector investors in the downstream sector have since learnt that they cannot compete with the NNPC. They borrow money at high interest rates to do business. NNPC uses government money. To worsen matters, another government agency, the Petroleum Products Pricing Regulatory Agency (PPPRA) fixes the price at which marketers can sell. Both the NNPC and the PPPRA exercise a monopoly of discretionary power to the disadvantage of other players in the market. This is probably the reason why other stakeholders, notably Total and Exxon Mobil are cautious. Is this conflict between NNPC mega stations and private fuel stations something Mele Kyari would like to address?

Under him, NNPC has also shown a great level of corporate responsibility. NNPC operations may have been affected by the Corona virus pandemic, nonetheless the corporation has contributed to the efforts to mitigate the impact on the people. This includes the launch of a Petroleum Industry Intervention Fund, which attracted a pledge of N21 billion, and is being used to fund medical interventions across the country’s six geo-political zones: notably the on-going construction of an Infectious Diseases Hospital in Maiduguri, Borno State, and partnership with ThisDay Media Group, Sahara Energy, the CBN and others to build the 230-bed ThisDay COVID-19 isolation, recovery and treatment centre in Abuja.

I rate Kyari highly but on the whole, the big elephant in the room at the NNPC is the urgent need for wholesale reform. The institution itself is in need of a shake up and a shake down. A much leaner and efficient NNPC focusing on the upstream sector may be of more strategic value than a corporation that is over-stretched across the oil and gas value chain.

A clash of political leaders: You can’t shave my head in...

Killing of aid workers, a crime that is unacceptable, insists INGO