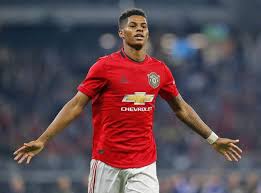 Manchester United moved up to fourth in the English Premier League (EPL) after a Marcus Rashford penalty kick gave them a 1-0 win over Leicester City at Old Trafford on Saturday.

Manchestee United, who were without injured French pair Paul Pogba and Anthony Martial, were far from convincing.

However, manager Ole Gunnar Solksjaer will be delighted they secured their second win of the campaign to move on to eight points.

After Andreas Pereira had forced Leicester goalkeeper Kasper Schmeichel into action with a powerful free-kick, Manchester United got ahead in the eighth minute.

Rashford, chasing down a loose ball in the area, went down under a challenge from Leicester City’s Turkish defender Caglar Soyuncu and referee Martin Atkinson pointed to the penalty kick spot.

Manchester United had missed their two previous penalty kicks this season, including Rashford’s failure from the spot against Crystal Palace last month, but the England forward made no mistake this time.

Rashford went closest to adding to the score with a curling free-kick which hit the bar seven minutes from the end.