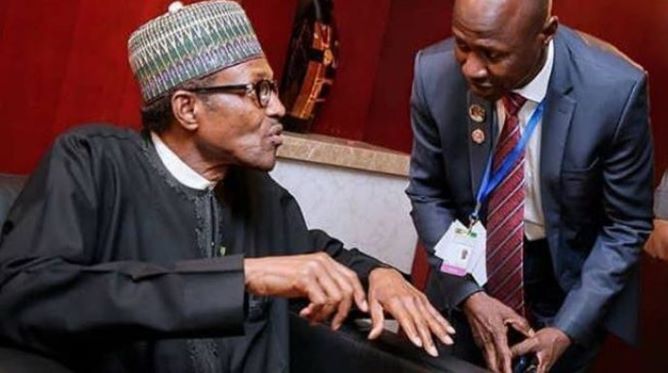 The Attorney-General of the Federation, Abubakar Malami (SAN) has said the probe and subsequent suspension of the former acting chairman of the Economic and Financial Crimes Commission (EFCC) is a plus for the administration of President Muhammadu Buhari.

Malami said this on NTA’s ‘One-on-One’ programme on Friday night while reacting to questions from the host, Cyril Stober.

The AGF stated that the probe of the suspended EFCC Chairman, Ibrahim Magu, was evidence that no one was above the law.

Responding to a question on whether the probe was to settle personal scores, the Minister of Justice said he wasn’t the one probing the EFCC rather it was the Presidency that set up a panel to investigate the commission.

On whether the probe of the EFCC wasn’t a blow to the anti-corruption war, Malami said, “I wouldn’t like to be pre-emptive of the panel put in place by the President relating to an agency but within the context of the first leg of the question as to whether setting up a panel to look into the activities of an anti-corruption agency is a blow or a plus, I think to my mind, it is indeed a plus.

“It goes on to establish the tradition which this government is known for; a tradition of no fear or favour as far as investigating corruption cases or allegations are concerned. So, to my mind, it is indeed a plus that reinforces and re-establishes a tradition by which the government of President Muhammadu Buhari is known, re-established to the effect that no allegation of corruption can be swept under the carpet. So, it is indeed a plus and not a blow.”

Recall that President Buhari recently approved the suspension of the embattled former EFCC boss and about 11 other top officials of the Commission including the Secretary to the Commission, Ola Olukoyede.

The EFCC under Magu is alleged to have been unable to account for the interest accrued to recovered loot of N550bn.

Ondo: OAU Vice-Chancellor is not our returning officer – INEC