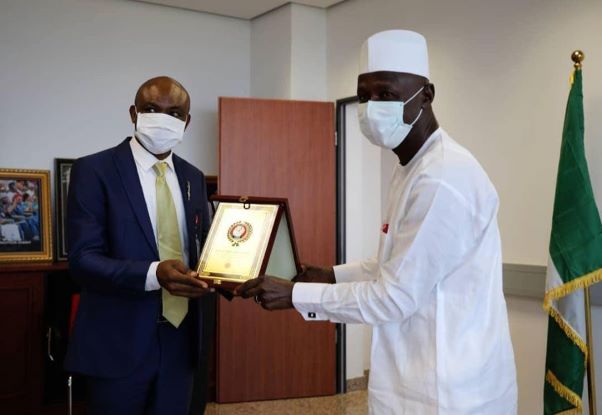 The Acting Chairman of the Economic and Financial Crimes Commission (EFCC), Ibrahim Magu, has expressed his determination and readiness to stop looters who have been stealing from the country, saying no amount of blackmail and mischief will deter him.

According to the agency Head, Media and Publicity Dele Oyewale, the Acting Chairman made the vow on Thursday, June 25, 2020 while receiving a delegation of the Nigerian Union of Journalists (NUJ), Federal Capital Territory Council, who paid him a solidarity visit at the Corporate Headquarters of the EFCC in  Abuja.

According to Magu, the prospects of Nigeria are great and must not be allowed to be wasted or stolen by corrupt elements without resistance.  “Nigeria is our common wealth.  This wealth must be protected at all times and all hands must be on deck to stop looters of our wealth”.  Speaking further he said:  “Those stealing, embezzling, hiding and carrying our wealth away are not our friends.  We must stop them.  We must stop looters.  We must stop the industry of corruption by all means and we shall surely stop them.” Magu quoted

On the numerous distractions thrown at the fight against corruption, he said, “Fighting corruption is not a tea party.  More than ever before, fraudsters are devising new techniques and strategies every day to beat established rules and systems.  Besides, several fight-back ploys are also being fashioned to distract and discourage genuine fighters of corrupt practices.  For us, all these strategies are all too- known.  We are familiar with the desperation of fraudsters.  We are familiar with their blackmail and campaign of calumny but we will not give up.  We will continue to expose and bring corrupt elements to book.  We will never give up!”

He expressed more dedication and commitment to the anti-corruption fight, stressing that the EFCC is too focused to be distracted.  “We are too focused to be distracted, we have lot of results to show for our efforts. The results will keep getting better. We are on course.” He also charged Nigerians to rise up and make corrupt practices less attractive. “We must fight to make corruption unattractive”, he said.

Magu thanked the media for its unwavering support, describing it as  the most important partner in the fight against corruption. “The Nigerian Union of Journalists (NUJ) has always been a formidable voice and development – focused organization in Nigeria. As the fourth estate of the realm, the Press is a pillar in our democracy”, he said. He tasked the media to rise up more than ever before to the task of fighting corruption, refuse to celebrate ill-gotten wealth and publicly own the anti-corruption fight.

The leader of the delegation and Council Chairman, Mr Emmanuel Ogbeche, said the NUJ officials came on a solidarity visit to Magu for his steadfastness and determination in the anti-corruption fight despite distractions and assured the EFCC of the continued cooperation of the Council members as partners in the war against corruption.

He called on the EFCC to continue its crack down on fraudsters and tasked it to track the management of funds being deployed to the fight against Coronavirus.

Other management staff of the EFCC that received the NUJ delegation include the Director of Organizational Support, Dr. Aminu Gusau mni; Director of Operations, Umar Mohammed Abba; Acting Director of Public Affairs, Hajiya Aisha Larai Musa; Special Assistant to the Chairman on Media and Publicity, Mr. Tony Amokeodo and Head of Media and Publicity and Spokesperson of the Commission, Dele Oyewale, amongst others.

“Your govt has worsened insecurity, destroyed and divided Nigerians” – Kukah...

4 herders in court for alleged kidnapping, terrorism in Benue

Coronation of new Olu of Warri gets underway amid pomp and...