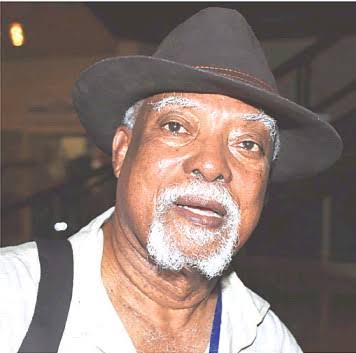 Iconic writer, dramatist, polemicist and man of affairs, Lyndsay Barret, has been unwell lately. He has had severe diabetes and a chronic sore developed. Only last week, his left leg was amputated at the ankle level. This is no advocacy for charity or any such matter. I saw him yesterday and he is well looked after by his lovely Bayelsan wife and a host of children, one of whom has typically attained critical acclaim and note.

I write merely to enhance consciousness about a man who arrived our shores over 50 years ago and has made Nigeria his home. Barrret is a peripatetic figure, at home in different parts of Nigeria with kings and commoners alike. He would be 79 at the end of the month. Now prodigiously grey, he looks like a figure from the old testament. But his substantive good looks shine through all the degradation inflicted by time.

This literary jewel first arrived in Nigeria in 1962 for a literary festival and was inevitably trapped by the literati in Ibadan where he was charged with looking after the Mbari club, a hot house for artists and unusual minds. By the time the war broke out in 1966, Barret had become a figure of great social and literary consequence. A lot of our military elites enjoyed his company and may have regarded him as a brag item. He famously wrote Gen Danjuma’s only authorized biography.

He is a robust advocate of the one Nigeria vision and not surprisingly, after Enugu was liberated by Federal troops in October 1967, Barret was chosen to join Ukpabi Asika in setting up a civic administration in the then newly created East Central State. Barret was Director of information. Biafran propaganda was nearly overwhelming at this time. But those who followed these matters can recall that Barret’s output from Enugu served as worthy rebuttals. I was an avid radio monger even at that time. I recall a series called ‘listen and Judge for Yourself’. It poured scorn on secession and criticized the betrayal of ibo youths by Ojukwu’s extravagant imagination.

The prose was strong, as strong as only Barret can make it. Delivered in his unique guttural voice, the programme was often a worthy riposte to the rhetorical brags, which poured out regularly from the highly successful Radio Biafra. Though recognized in many parts of Nigeria, Benin has been a warm home and habitat for Barret. He has spent many lovely years in the city spawning a web of friendships, which included the mighty and the lowly.

Majek Fashek as a young aspiring music figure enjoyed the patronage of this great enigma. He has lately been slowed down by age and the loss we all suffer when drivers of policy whom we know, are shed from high office and the limelight. But Lindsay Barret hugs Abuja, his imagination as restless as ever. I read most things he writes.

But no output has devastated me with its power as much as his last ditch effort to save Gen Vatsa from Babangida’s guns. Barret’s public appeal, laden with the emotive power of friendship and mutualities, is amongst the most priceless prose, it has been my honour to encounter.

Regrettably Babangida remained unmoved. Not by the arguement. Not by the beauty of the prose. But all that belongs to yesterday.

Our reality is Barret. He is alive and kicking and remains a worthy old boy of the Benin metropolis.