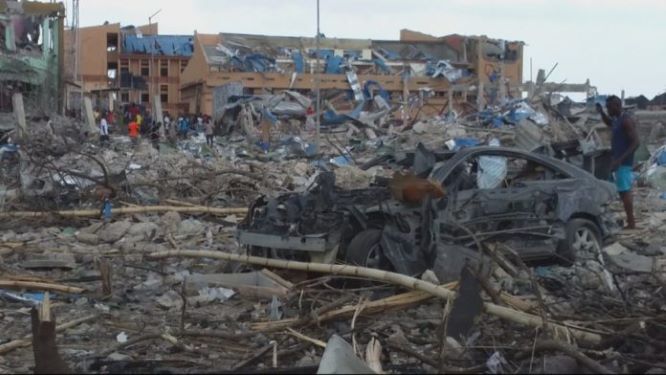 The National Emergency Management Agency (NEMA) says over 50 buildings were destroyed in the explosion that rocked Abule Ado, near the Trade Fair Complex on the Lagos-Badagry highway.

Mr Ibrahim Farinloye, Acting Coordinator of the Lagos Territorial Office of NEMA, confirmed the development in Lagos on Sunday.

Farinloye said that the cause of the incident and casualty figure were currently unknown as “rescue operations are still going on in the affected area’’.

He said the resulting fire, from the explosion, later spread to the Nigerian National Petroleum Corporation (NNPC) oil pipeline passing through the area, although though the pipeline has been shut down as a precautionary measure.

According to him, a combined team of the Lagos State Fire Service, Federal Fire Service and the Nigerian Navy Fire Tender are currently battling to put out the inferno.

The explosion, which occurred about 9 a.m. on Sunday, caused panic among Lagos residents after it shook many houses in Ijegun, Festac Town and other communities in the Amuwo Odofin Local Government Area up to Agege, near Lagos.

The headquarters of the  Lagos Province 3 of the Redeemed Church of God (RCCG) located on 24 Road,  Festac Town, Lagos, is among over 70 buildings affected by a pipeline explosion that occurred in the area on Sunday morning.

The explosion, which occurred more than a kilometre away from the church premises, shattered its glass windows, injuring worshippers.

A parish of the First Baptist  Church near the RCCG parish also lost a part of its roof to the explosion.

The roof of a parish of the Living  Faith Church (Winners Chapel)  located at 7th Avenue, Festac Town, was also blown off by the explosion which equally  shattered the roof of the Ark Parish of the RCCG at 1st Avenue, many kilometers away from the explosion  scene.

The Bethel Secondary School, a boarding school owned by the Catholic Church in Abule Ado, was brought down by the explosion, with many of its students injured and some feared dead.

Many other buildings very far from the explosion scene in Abule Ado, Festac Extension in Amuwo Odofin LGA, were also brought down while many others shook during the explosion that threw thousands of residents in panic and confusion.

The Odic Plaza, a motor parts mall and warehouse, Bush Bar Hotel, Green Horse Plaza which houses tyres, Arch Angel Catholic Church, Chino Plaza with many goods in it, and  a mechanic village, all located inside the Trade Fair Complex, Ojo, were all hit by the explosion.

The cause of the explosion has yet to be ascertained according to the National Emergency Management Agency, which is yet to confirm the death toll.

A witness, Mrs Patience Erebogaya, said that she was preparing to go to work in a nearby hotel when the Bethel School was scattered by the explosion and injured her.

The victim said that mass celebration was going on in the catholic school when the explosion reduced the school to rubbles, trapping many students.

The state Commandant of the Security and Civil Defence Corps, Mr F. A. Adeyinka, said that security personnel and other  emergency responders were working hard to bring the situation under control.

The Chairman of Amuwo Odofin LGA,  Mr Valetine Buriamoh, who was at the scene, ruled out pipeline vandalism  as the cause of the explosion.

He said that the magnitude of the damage was beyond pipeline vandalism.

He appealed to the residents to give  access  to security operatives and emergency responders to do their jobs.

Also, security and emergency personnel at the scene of Abule Ado explosion in Lagos on Sunday said they were yet to ascertain what caused the explosion which claimed one life and destroyed hundreds of property.

Muawiyah Halilu, Assistant Commander, Police Area ‘E’ Command, Festac Town, said at the scene of the explosion that the cause and casualties were yet to be ascertained.

“From eyewitnesses, nobody can tell if it was a pipeline vandalisation or not, all that we heard was a loud explosion and vibration.

“I cannot give you exact number of casualties for now, I only saw one corpse on the ground, the others I cannot say,” he said.

Also, Fasiu Adeyinka, Lagos State Commandant of Nigeria Security and Civil Defense Corps, said that rescue operations was ongoing to get people out of the rubble of collapsed buildings.

“There are casualties but they cannot be ascertained now,” he said.

However, Amuwo Odofin Local Government Chairman, Mr Valentine Buraimoh, said the explosion might be as a result of technical fault from the pipeline.

“I was informed that it was a technical fault from the pipeline, and that it’s not a result of vandalisation.

“There are some army personnel about 20 metres away monitoring the pipeline so it’s not vandalisation,” he said.

Buraimoh noted that some students of Bethlehem Girls School, destroyed by the explosion, were rescued from the scene.

“Many have been injured and taken to the hospital.

“The firefighters are doing the best they can; imagine using a hose that is not up to 10 metres to quench a fire that is a mile away.

“There is the much they can do without the necessary equipment to fight fire,” he said.

There were about seven fire fighting vehicles, emergency response agencies, including the Red Cross and National Emergency Management Agency (NEMA), at the scene.

Also, many houses, including Bethlehem Girls School, had collapsed, while houses that were still standing had their roofs either blown away or crushed.

Vehicles were seen with crushed windscreens and dents from the explosion.

Many residents who had gone to church could not go back home while others didn’t have any home to go back to.

A corpse was seen on the ground, close to the scene of the explosion.

None of the agencies on ground had been able to ascertain the number of casualties recorded and the fire was still burning as at 3:30p.m