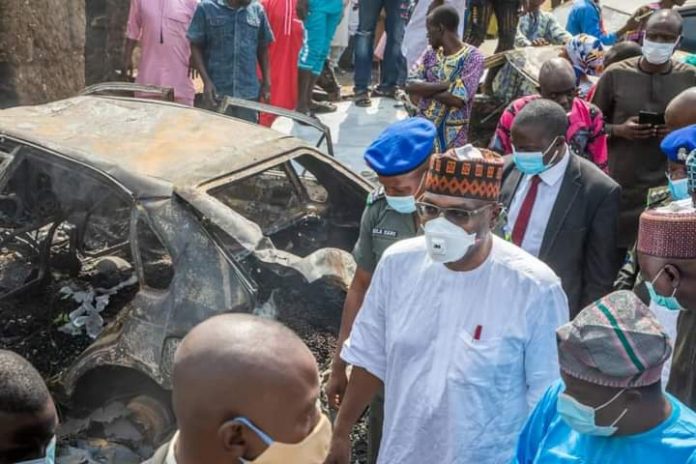 Kwara State Governor, AbdulRahman AbdulRazaq, has visited the scenes of Wednesday morning inferno in Jebba, Moro local government area of the state, describing the incident as painful and praying the Almighty God to relieve the victims of their losses.

“The incident is very disturbing and we have to come down to see the extent of the destruction. It’s far more than what we thought. The inferno engulfed many houses. It affects about 43 houses,” AbdulRazaq told reporters after inspecting the site.

He was accompanied on the inspection tour by House of Assembly Speaker Yakubu Danladi Salihu; Senator Yahya Oloriegbe (Kwara Central); Senator Sadiq Umar (North); Deputy House Leader who is the lawmaker from the area John Bello; commissioners and some other top government functionaries.

AbdulRazaq said the government would come to the aid of the victims within available resources – a day after he directed the State Emergency Management Agency to identify the victims and document the losses.

“We just need to come to the rescue of our people who lost properties. Some people also lost their lives. May their souls rest in peace,” the Governor said.

He also commended the Federal Government for the infrastructure projects sited in the state, and said the administration would continue to push for more, especially the dredging of the River Niger and timely completion of ongoing road projects.

“We hope the road will be fully put in the budget next year and the funding release so that the dualisation will commence. From here to Mokwa is one of the best and busiest roads in Nigeria. We thank President Muhammadu Buhari for investing in road infrastructure.”

Bello, who conducted the Governor round the site, confirmed that seven persons died in the accident.

He commended the Governor for the swift response to the incident, saying he had carved a niche for himself as a leader who cares for all.