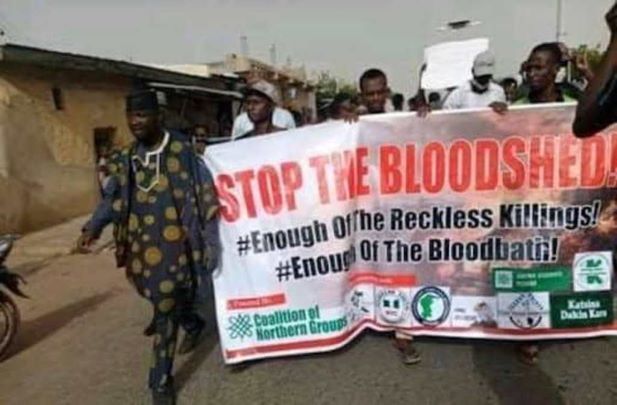 The Peoples Democratic Party (PDP) has questioned the arrest of organizers of a peaceful protest against the unchecked mass killing by bandits and insurgents in Katsina and other parts of the country, particularly in the north.

The party in a statement signed by the National Publicity Secretary Kola Ologbondiyan described the arrest as absurd, but revealing, that the APC-led government would arrest, harass and detain victims of the bandits but chose to negotiate, hobnob with and even pay money to the assailants.

The main opposition party said the arrest further raises demands for the APC and its governors, particularly, those who openly confessed to have had contacts, negotiations and financial dealing with the bandits, to come clean on their alleged links with insurgents and marauders. “Such actions by the APC administration, in addition to utterances of its leaders, have continued to dishearten Nigerians while emboldening bandits and insurgents to continue to pillage our communities, hold towns to ransom and visit all manner of violence on vulnerable Nigerians in various parts of the country,” PDP said

The party recalled utterances by certain APC leaders, including asking victims of attacks not to revenge even in the face of poor security presence in affected communities as well as admission by government that the marauders were mercenaries from the Sahel region and armed deserters from late Muammah Gadaffi’s Libya.

The party reminded Nigerians that the APC and its leaders are yet to explain the whereabouts of the thugs they imported as political mercenaries from neighboring countries, particularly Chad and Niger Republic to support the party’s bid during the build-up to the 2019 general elections.

It said the APC and its leaders are yet to answer how marauders who were already pushed to the fringes by the PDP administration, resurged under their watch.“Nigerians can recall that prior to the 2015 general elections, insurgency had been extensively compressed, leading the successful conduct of the general election in all the 774 local governments across the country.

“It is therefore clear that the constant narrative by the APC that some local governments were under the control of insurgents, when it took over office, is a mere propaganda,” the party stated.

It further stated that the situation in Katsina and other northern states ought to be seen by the Buhari administration as a patriotic call to wake up to its responsibilities and take a decisive action to flush out the bandits and secure our nation.

The PDP counsels President Muhammadu Buhari to go beyond endless meetings within the comfort of the Aso Presidential villa and, for once, lead from the front in this fight against insurgency and banditry in the country.

Presidency to Soyinka: Nigeria has always been divided

Coming: The North’s Army of occupation? By Bola Bolawole

Oshiomhole opens up: Buhari’s minister behind my travails over 2023 presidency

There’s need for voices of African Child to be heard, says...