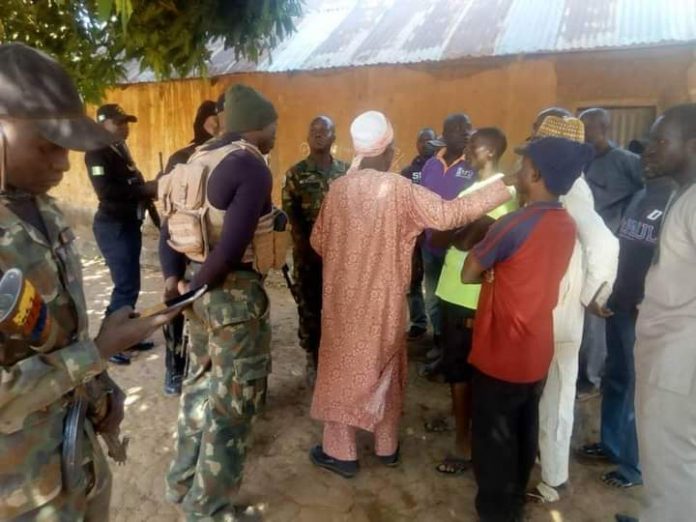 The Kaduna State Government has frowned at some locals who protested against troops in Kamaru Chawai, Chawai Chiefdom, Kauru local government area.

The State Commissioner, Ministry of Internal Security and Home Affairs, Samuel Aruwan, said the protest was connected to an eye witness’ submission to the military on the Friday night killing of three persons in the village.

He said the witness informed troops that the killers were strangers from outside the community, and spoke English.

On Saturday evening, however, some angry locals harassed the witness to change his earlier statement.

He said in the process, some women attempted to burn their accommodation.

The troops were able to stop the attempt and disperse the mob, although a patrol motorcycle and some personal belongings were burnt, including foodstuff.

Aruwan said the local chief, Malam Jume Umaru, 77, who tried to caution the protesters against the violent action, was beaten to a pulp.

He has been taken into safe custody by the military.

He said the youth leader of the village and four others were invited for questioning, as calm was eventually restored.

Aruwan said the Sector 7 Commander, Col David Nwakonobi, has moved to the location and reached out to critical stakeholders.

He said Governor Nasir el-Rufai on receiving the report, frowned at the conduct of some locals, recalling two prior similar incidents.

The governmor added that the protesters should have gone to the military intelligence with any emerging information, without resorting to violence.

He said the troops and personnel were deployed in the area to protect citizens, with some paying the supreme price and others incurring lifetime injuries.

He thus reminded the citizenry to accord them due appreciation and collaboration against criminals.

The governor commended the troops for being professional in handling the situation which could easily have escalated.

He has directed that the violent protesters who burnt property be fished out for appropriate action, and that the latest submission be incorporated into the ongoing investigation of the Friday killing.

Soyinka to Buhari: Our nation is at war…vultures, undertakers hover patiently...

Buhari,Jonathan meet on crisis in Mali

Nigeria vaccinates 8,000 in 35 States amid concerns about side effects...