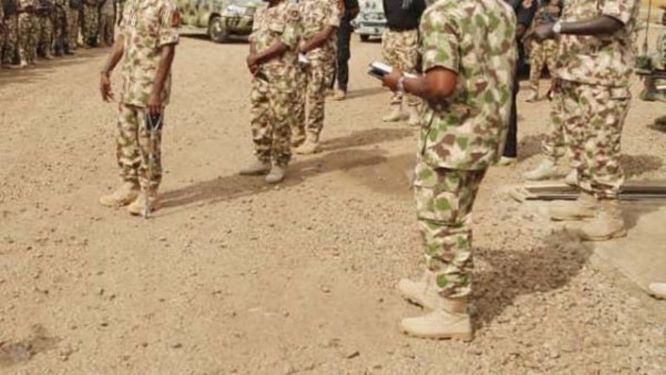 One person has been confirmed dead with five others seriously injured after some soldiers attacked the Borno COVID-19 Committee in Maiduguri.

The ConclaveNg News established that the Borno State Attorney General, Barrister KakaShehu Lawan and the State Commissioner for Health, Dr. Salisu Kwaya-Bura were part of the team who were on the enforcement of the inter-state lockdown along Maiduguri-Damaturu highway when they were attacked.

The soldiers were said to be escorting some travellers into Maiduguri when they rammed and hit the convoy of the  COVID-19 Committee with an armoured vehicle and in the process, a hilux conveying some members of the Borno Rapid Response Squad attached to the Committee, capsized, leaving the driver and five others critically injured.

The driver was later confirmed dead at the State Specialists Hospital where all the injured were rushed for treatment.

The soldiers, without remorse, were later alleged to have jumped down from their vehicles and assaulted the COVID-19 team, with the gun truck pointed at both the Secretary of the Committee, who is also the Borno State Commissioner of Health, Dr. Salisu Kwaya-Bura, as well as KakaShehu Lawal, the Attorney General and Commissioner of Justice.

The soldiers were also accused of beating up the cameraman man attached to the committee for having the audacity to film the encounter.

They were equally accused of seizing the cameraman with both the Attorney General and Health Commissioner left thoroughly harassed and visibly shaken.

Speaking at Njimtilo, the scene of the incident, the Attorney General said the soldiers turned one of their gun trucks to his face threatening to shoot him during the assault.

Lawal called on the military authorities to witness what happened in order to bring an end to the apparent impunity.He said: “As Nigerians , the missions and visions of the president Muhammadu Buhari led administration and of course, the Chief of Army Staff,  is to protect lives and property of citizens.  We cannot just allow chunk of the military men to cause havoc when people are doing their official duties.

“We are convinced that the soldiers are known, the military authority will investigate and make the result known to us. In the course of the Investigation, I believe that we will be invited as witnesses.”

Also reacting, the Borno State deputy governor, Usman Kadafur, who is also the Chairman of the COVID-19 Committee, who was invited to the scene of the incident by the shocked commissioners, said on getting hint of what happened, he quickly rushed to the scene and reported the case to the Garrison Commander who has taken necessary action on the matter.

He said: “The Garrison Commander called the attention of the Commanding Officer of that unit and I learnt that even a cameraman attached to the Committee was beaten and his camera seized. But I learnt that the camera has been released.

“And the Garrison Commander has apologised to the Committee and promised to set up a special committee of enquiry over the unfortunate incident,” Kadafur said.

Also reacting, the State’s Commissioner of Health, who was also assaulted by the soldiers, said while the Committee is taking the enforcement of the interstate ban more serious is because, 90 percent of the cases of COVID-19 in the state were found on people who travelled in to the state from another place.

He regretted that the soldiers who are to protect citizens turned out to be the ones violating the rules by escorting travellers in to the State.