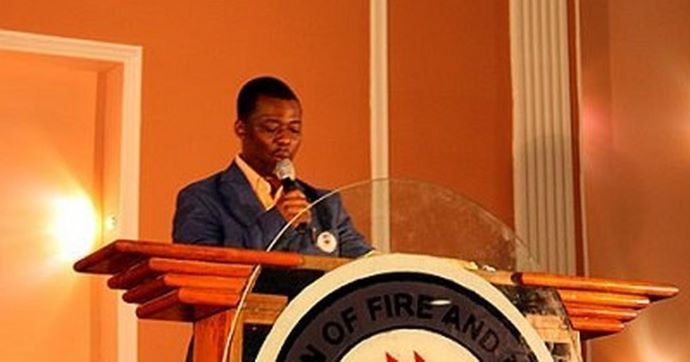 General Overseer of Mountain of Fire and Miracles Ministries (MFM), Dr Daniel Kolawole Olukoya, has denied involvement in any fraudulent activities as being portrayed in some sections of the media, which he accused of being bent on churning out malicious stories against him and the church.

Defending Dr Olukoya, in a statement, his media aide, Mr Collins Edomaruse, said the seven allegations laid against the General Overseer and the MFM were without foundation, but intent to damage his reputation and destroy the global image of the church.

Edomaruse also said “It has become pertinent for the purpose of clarity to respond to the false allegations being peddled against the Mountain of Fire and Miracles Ministries and our General Overseer – Dr D. K. Olukoya in the social media particularly sponsored by SaharaReporters. These allegations are seven (7) in number namely:

No. 1 That Dr Olukoya falsely claimed residence of US city of Maryland.

Nothing can be further from the truth. Dr Olukoya is a public figure nationally and internationally. His domicile is therefore a fact of public knowledge. The true position is that the Pastor who wanted to register MFM in Maryland inserted Dr Olukoya’s name without prior consultation with or knowledge of the G.O. because he believed that Dr Olukoya should be involved but after he consulted a lawyer and received advice that a person’s name cannot be on the incorporation documents unless he is resident in Maryland, that registration was put in abeyance and allowed to lapse. The Pastor is still alive and all the evidence are there for all to see at the Company Registry in Maryland.

No. 2 Allegation is that Dr Olukoya Illegally imported books into the United States and evaded payment of Customs duties on those books.

This is also untrue. Dr Olukoya’s books are sold on Amazon. It is fool hardy for anyone to suggest that he brought in his books to US illegally when he can and has been doing so legally. This false allegation was pioneered by a former Pastor of MFM who tried to steal MFM Branch in Maryland. He conceived this lie as his defence to a civil suit the Church brought against him in the County Court in Maryland. This concocted lie could best be described as the wild thrashings of a drowning man intent on bringing everybody down with him. However, in defence of this allegation, MFM brought its book keeper to testify in court who produced all the receipts of payment and customs documents and, in the end, the Judge not only thrashed the wild allegation but gave judgement in favour of MFM.

No. 3 is the allegation that the Trustees in the UK were suspended.

This is completely false. They were never suspended. They are still in charge of the Church even up till now.

No. 4 is the allegation of fraud against the Trustees of MFM UK.

The trustees were never indicted. We can authoritatively say that no Trustee of MFM-UK has ever committed fraud.

No. 5 is the allegation that Drp Olukoya connived with someone to steal 150,000 pounds.

This is a complete fabrication from the fevered minds of the defamers. Fortunately, all the people that took money illegally are still alive. The genesis of this allegation is that the lease of one of our branches in London contained a clause which stipulated that any party who broke the Lease for any reason before its expiration would pay a penalty of 150,000 British Pounds to the other party. It happened that the owner of the property broke the lease and sold the property to a third party which necessitated the Church relocating from the building. The property owners honoured their obligation and paid the penalty sum of 150,000 pound which the Pastor of that branch somehow found a way of paying into his personal account without informing the Headquarters and conspired with the external auditors to shield that income from discovery. It was much later that a member of that branch brought to the attention of Headquarters that such amount of money had been received by the Pastor. Headquarters immediately set up a panel to investigate the incident and give fair hearing to the Pastor concerned. He attended the sitting of the panel and unequivocally admitted the theft. The Panel directed him to refund the money immediately. Upon receipt of the report of the Panel, the General Overseer issued the Pastor an ultimatum in writing to pay back the money within forty-eight (48) hours whereupon he promised to re-mortgage his house in London to comply. It was later brought to the attention of Dr Olukoya that this ultimatum had not been complied with by the Pastor who, on his own, began to repay the money by instalments.

From the above narration, it is crystal clear to any unbiased mind that the money was stolen long before the Headquarters and Dr Olukoya got to hear and that when they did, appropriate internal machineries were promptly put in place to investigate and recover it.

The publication on the Charity Commission’s website which Sahara Reporters quoted out of context does not say or infer that Dr Olukoya as Lead Trustee of the Church connived at the losses. It simply states, albeit on a false factual basis, that Dr Olukoya agreed with and permitted the Pastor to repay the money by instalments. The questions that flow from Sahara Reporter’s misconception and misrepresentation are:

Suffice to say, at this point, that Dr Olukoya has in letters dated 15th and 16 August, 2019 written to the Charity Commission to challenge the non-factual nature of the report written about him on their website. The Commission in a terse reply dated August 20, 2019 indicated that it would address that complaint.

No. 6 is the allegation that MFM and Dr Olukoya are land grabbers and were set to lose the MFM Prayer City land.

Besides the fact that MFM has a Certificate of Occupancy, the falsehood of this allegation has been judicially determined by the fact that the lawyer who granted the interview from which Sahara Reporters made the false publication, as usual without independent research, has been damnified in damages for libel in the judgment of a High Court.

No. 7 is the publication by Sahara Reporters that its Publisher Omoyele Sowore and his crew were beaten up and detained by MFM at its Prayer City.

The necessity to re-address this false allegation is underscored by the fact that the incident leading up to it is the foundation of Sowore’s deep-seated hatred for MFM and Dr Olukoya and the reason for his sustained rancid and venomous attacks on our Church and General Overseer.

On the Cross-over service held at the MFM Prayer City in the night of December 2012 to the morning of January 2013, Sowore and his Crew, without being previously accredited like all other journalist and newsmen covering the event, gate-crashed and started filming and advancing towards the podium where Dr Olukoya had already started preaching. Recall that this was a period when terrorist attacks and bomb blasts in places of worship were rampant and security was beefed up in such locations with large presence of uniformed and plain clothed Policemen, DSS operatives, bomb detection squads and other security operatives.

These Security operatives stopped Sowore and his crew from advancing further towards the podium, took them out for questioning and after they identified themselves they were advised to restrict themselves to the area reserved for pressmen but Sowore in his conceited perception of himself as having a larger than life image and reputation took offence at the suggestion and left with his crew only to subsequently concoct and publish those lies; and has not relented since then.

Our members and friends are advised to just ignore these false and malicious publications for what they are.