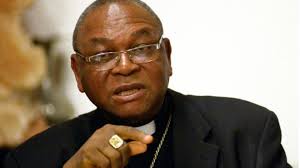 The Catholic Bishops of Abuja and Jos Ecclesiastical provinces have called for peace and an end to the recent upsurge of violence between Jukun and Tiv communities in Taraba.

The bishops expressed their feeling in a statement issued at the end of a meeting in Abuja.

The statement was signed by 16 bishops, including His Eminence, John Cardinal Onaiyekan of Abuja, the Most Rev. Iganaius Kaigama of Jos, Most. Rev, Mattew Audu of Lafia, and  Most Rev. William Avenya of Gboko.

Other signatories were the Most Rev. Wilfred Anagbe of Makurdi and the Rt. Rev Charles Hammawa of Jalingo.

The Tiv/Jukun crisis which erupted from Kente, a border town of Benue and Taraba has led to the loss of many lives including, women and children, in the last three months.

Also, on Aug. 29, bandits ambushed and killed a Catholic priest, Rev Fr. David Tanko at Kufai Amadu in Takum Local Government Area, by setting him and his vehicle ablaze.

The cleric was said to be on his way to Takum for a peace meeting with fellow clergymen on how to resolve the lingering Tiv, Jukun crisis.

“We, the Catholic Bishops of Abuja and Jos Ecclesiastical Provinces, are sad, and it is with great dismay that we note the recent upsurge of violence, resulting in the horror and carnage we are experiencing.

“We are Christians, and we are saddened about the continuous disturbing trend leading to deaths, destruction of homes and means of livelihood in the affected regions, among tribes that should be best of neighbours.

“ As Christians we believe and uphold the sanctity of life from birth to natural death (cradle to the grave).

“We know that scripture and teachings of the Church are uncompromising about the sacredness of life,’’ they said.

The bishops noted that since the tribes of our region: Tiv, Jukun, Idoma, Igala, Angas, Berom, Eggon, Alago, Bassas, Mumuye, Kuteb, were mostly Christians, the words of St. Paul in his letter to the Galatians should be their binding force.

“There is neither Jew nor Gentile, neither slave nor free, nor is there male nor female, for you are all one in Christ Jesus. (Gal 3:28).

“By the same understanding, we are saying that in Christ there is neither Tiv, Jukun nor native, indigene nor foreigner, neither visitor nor stranger.

“We are all one in Jesus Christ the Saviour of all mankind. We are all created in the image and likeness of God.  He gave us the land to inhabit and improve for our own benefit and development,’’ they noted.

They further called on government to get to the root cause of the recurring conflicts which had caused great setbacks and obvious hardship in different forms for the people.

“We would appreciate moderate and reconciliatory utterances from our political, traditional and religious leaders and elders, with more concrete and deliberate actions in favour of peace and not war.

“ Silence during such conflicts is not golden but very unhealthy,’’ they added.

Also, the bishops condemned the unhealthy propaganda, prejudices meted out through the social media as well as exaggerated media comments and write-ups which sometimes fuelled the crisis.

They noted that as clergy and religious, they remained agents of reconciliation irrespective of their tribes by the sacrament of the Holy Orders.

“We belong to all, and we are fathers of all and so, we cannot be reduced to tribal vanguards or ethnic champions. We belong to all. This is the essence of our priesthood and vocation.

“We should stand above ethnic interests and preach justice, love and forgiveness for the common good of all,’’ they said.

They appealed to all men and women of faith, and all people of good will, to speak out and take action in favour of peace.

Public institutions should be open to scrutiny to engender faith and...